A runner has become the latest Ethiopian athlete to stage a political protest in Rio, after he crossed the finish line in a 1500m event at the Paralympics.
Tamiru Demisse, who was competing in the final of the T13 race for visually impaired runners, crossed his arms above his head as he crossed the line in second place, taking silver behind Algeria’s Abdellatif Baka.
The crossed-arms symbol is in reference to the political persecution of the Oromo ethnic group by the government back home, and echoed a similar gesture made by Feyisa Lilesa at the end of the marathon event in the Olympics.

Unlike Feyisa, who was reminded by officials that the International Olympic Committee frowns upon political gestures at the Games, Tamiru also repeated the gesture during the ceremony to receive his medal.
Last month, Feyisa explained that he he conducted his protest in response to the killing of the Oromo people, saying the government was “killing our people”.
He has now travelled to the US, after a crowd-funding campaign to support him and his family raised its target of $150,000. He said if he returned to Ethiopia “they will kill me… or if not kill me, they will put me in prison”. 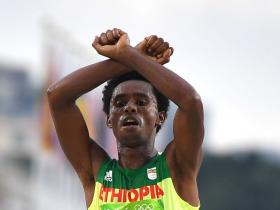 Feyisa Lilesa fails to return to Ethiopia after Olympic protest

Sunday evening’s T13 1500m race was also remarkable for the fact that the top three runners, Algeria’s Baka, Tamiru and Kenya’s Henry Kirwa, all ran faster times than the 3:50:00 that won gold for the US’s Matthew Centrowitz Jr in the Olympic 1500m race.
The conflict between the government and the Oromo, the largest single ethnic group in Ethiopia, flared up last year over land and political rights.
Human Rights Watch estimates that more than 500 people have been killed since the government began a brutal crackdown on political protests. The government disputes that figure.
Posted by Guihon at 8:16 AM