The Great Ethiopian Run: in the footsteps of Haile Gebrselassie | Life and style | The Guardian

It's a crazy, joyous race at 2,300m above sea level in Addis Ababa, and it's the adrenaline as well as the altitude that leaves competitors breathless after the Great Ethiopian Run
BETA 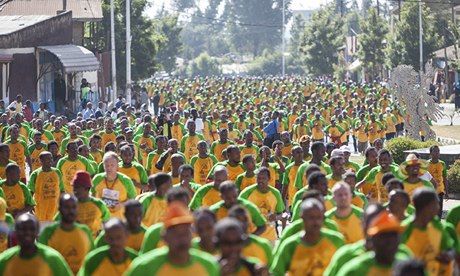 More than 38,000 runners hit the streets of Addis Ababa for the Great Ethiopian Run, Africa's biggest race. Photograph: Dan Vernon
I am standing at the start line of the Great Ethiopian Run: not only the biggest race in Africa but one of the continent's biggest talent-spotting contests. Officially there are 38,000 of us, all in yellow-and-green race T-shirts, jostling and shoving and staring down a line of police with batons. But hundreds of others have sneaked into line, with home-brewed kit, swelling the numbers still further. A marshal warns me, "Don't try to get in front when they start – you'll be trampled!", then there's the blast of a horn, a rising crackle of noise, and the police cordon sprints for safety. Ahead of me two men lose their shoes in the tumult – and don't return – and I wonder: what the hell have I let myself in for?
For others, however, this 10km race around the hills of Addis Ababa, at an altitude of 2,300 metres, offers the chance to follow in the footsteps of the great Ethiopian runners: Abebe Bikila, who won the 1960 Olympic marathon in Rome running barefoot; the revered Haile Gebrselassie, 10,000m gold medallist at the Atlanta and Sydney Olympics; and the current 5km and 10km world record holder Kenenisa Bekele. Previous winners in the race's 13-year history have gone on to win major marathons and Olympic medals. The race – which is shown live on Ethiopian TV – is not just a showcase for runners, but for the country, too.
That it takes place at all is down to Gebrselassie, who many see as a future president of Ethiopia. Invited by Brendan Foster, the founder of the Great North Run, to come over to Newcastle, Haile responded: "Why don't you help me to start a Great Ethiopian Run?" So Foster did.
"The whole country is running," says Gebrselassie, offering Ethopian coffee so strong you suspect it partly explains the speed of the country's athletes. "We try to rise up the people to do something. Sport has just one language, and when you encourage people through sport you encourage every sector, whatever their job. One religion, one culture, one language – and that is running."
But caffeine-fuelled beverages aside, why are Ethiopian distance runners so good? "It's because of opportunities here," says Gebrselassie, who spends the days before the race patiently smiling, chatting and posing for photographs. "Plus the lifestyle: the kids walk to school – no, they run! – every day. I ran six miles every day to school and back so my training started when I was three or four." Unsurprisingly, the Great Ethiopian Run even has a race for the under fives.
Though there are a few international runners – a team from Norway and a speedy gang from Birmingham – the race at elite level is tough for most foreigners because of that altitude. While your legs feel good to go, your lungs wheeze and moan in protest. It's like someone has strapped an iron band around your chest and compressed it.
My first experience of this comes on a track built by Bekele high in the mountains. Bekele himself has come to train, and we jog very slowly with him. At least, my GPS watch says it's slow – my lungs appear to think I've just finished a sub-four-minute mile. This is why athletes train at altitude – and why those born at it have an advantage – the body adapts to the relative lack of oxygen. But not, of course, on day one. And not when you are trying not to wheeze too loudly behind a multiple Olympic gold medallist. 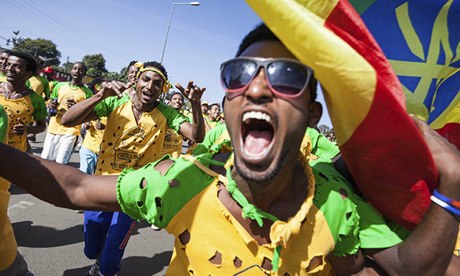 After warming up, we follow Bekele into the woods where he and many other elite athletes train. He slips away in a matter of seconds, leaving us to puff and tootle around a few miles of hyena territory. "That's OK, they only come out at night," says a cheery runner. "Just don't be last!"
But by race day, either I've adapted slightly or the adrenaline has kicked in. Once I summon the courage to get out of the sidelines and into the sea of runners, I'm away. The first few kilometres are very slow, because of the sheer press of people, many of whom are too interested in talking, showing off and having fun to care what time they finish in, but the atmosphere is incredible. There are spontaneous outbreaks of loud joyous songs and chanting. Others dance and shout. I can't stop smiling.
The noise quietens – though only very slightly – as those hills kick in. I'm surrounded by friendly, chatty people, though the man who wants to talk to me about my impressions of Ethiopia probably shouldn't have chosen an uphill stretch to do it. Where some races have hi-tech drizzle showers to cool you off, this one has a full-on garden hose. Most people stop to dance in its makeshift shower.
Way, way, too soon (something I have never thought in a race before, and suspect never will again) the 9km marker is in sight and it's just the home stretch. The men's winner, Atsedu Tsegay, finished a long time ago and is about to be presented with his trophy by Gebrselassie.
My finish time is six minutes slower than my personal best, but that's irrelevant: this is the craziest race I've ever done and one of the best experiences of my life. As Haile eloquently puts it: "The best way to get rid of all stress and everything is to sweat a bit. It's a kind of treatment." And one that I would happily sign up to again.
Posted by Guihon at 2:29 AM No comments: