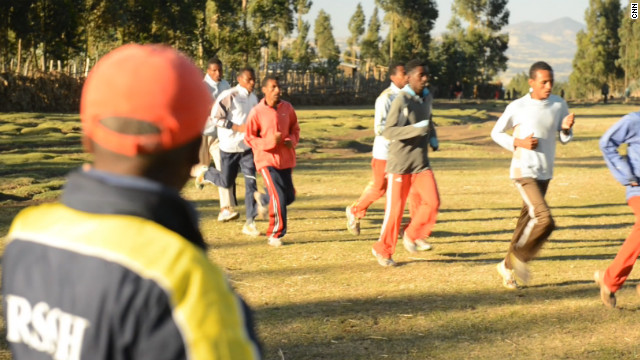 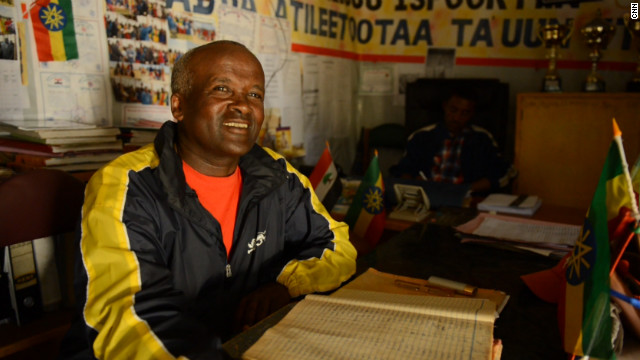 In his small office in Bekoji, Eshetu has kept a record of his runners since he first began training them some 25 years ago. The weight, height and fastest time of all of his prodigies are hand-written here, year by year, so he can keep track of their progress.
HIDE CAPTION
Town of champions
<<
<
1
2
3
4
5
6
7
8
9
10
>
>>


STORY HIGHLIGHTS
Bekoji, Ethiopia (CNN) -- It might be many miles away from the usual sporting capitals of the world, but when it comes to long-distance running there's one tiny place that's setting the pace.
Nestled amidst rolling farmlands on the green hills of southern central Ethiopia, Bekoji is a sleepy town of less than 20,000 people, most of whom are farmers and herders.
But apart from the wheat and maize growing on Bekoji's fertile soil, this small town a few hours south from capital Addis Ababa is also the breeding ground for some of the best track and field athletes in the world.
Set at about 2,800 meters above sea level, Bekoji has produced a string of Olympic champions and world-beating long-distance runners, including multiple Olympic gold medal winners Tirunesh Dibaba and Kenenisa Bekele.

Finding Ethiopia's future gold medalists
Sentayehu Eshetu, the legendary coach who has so far trained four of Bekoji's Olympic gold winners, says that a winning mix of thin air, lean diet and different terrains has helped the town's rich crop of runners stand out in recent years.
"Our training fields are very conducive for athletics," says Eshetu, 56, who is known in Bekoji simply as "Coach." "We have downhill, flat land, all of these here in Bekoji. The food they eat also has an impact, the weather has an impact, the combination of these makes the kids successful."
Read this: Senegalese teens shoot for U.S. glory
Eshetu is quick to add, however, that favorable weather and training conditions do not guarantee success. Determination and dedication are key, he says.
"Our runners are successful because they work hard," he explains. "They work with the aim of reaching for success. This is what makes them different."

Click map to expand
And if there's anyone who should know about success, that's Eshetu. For some 25 years he has been discovering and nurturing the talents of some the finest runners in Ethiopia -- a global powerhouse in long-distance running, with 35 Olympic medals in the last 20 years.
Apart from Dibaba and Bekele, Eshetu has also trained Derartu Tulu, a two-time Olympic champion, Tiki Gelana, the marathon winner at the 2012 London Olympics, Tirfi Tsegaye, winner of the recent 2013 Dubai Marathon, and many others.
Read this: Cameroon's outspoken football star
Using a blue-walled mud hut as an office and Bekoji's fields as training grounds, Eshetu spots, coaches and mentors scores of local youngsters who follow his rigorous routine in the hope of running their way from Bekoji to international stardom.
"When I recruit athletes, I look at those who have a desire to put in the work," says Eshetu. "I look at their shape. Kids who are too short won't have good results. Those who are tall walk upright and those who complete their training with passion, I recruit them.
"They train here for three years after entering the camp. After three years, those with good results move on to other clubs. After that, based on their time, they compete in other races, even international ones."
But for the majority of these young athletes, this is not an easy road. Poverty is common, sporting equipment does not come cheap and most get by on no more than two meals a day.
Here athletes have difficulty with getting regular food, with owning shoes, they face a lot of problems.
Sentayehu Eshetu, running coach
"Here athletes have difficulty with getting regular food, with owning shoes, they face a lot of problems," says Eshetu. "They have to sew their shoes, manage with little food, work long and hard, but I believe this allows them to become stronger and successful."
Read this: NBA boss finding Africa's basketball stars
Eshetu's golden girl is three-time Olympic champion Dibaba, a member of a sporting family dynasty that includes four successful long-distance athletes. Last summer, as Dibaba sprinted through the finish line to win gold in the 10,000 meters at the London Olympics, Eshetu was watching proudly on a screen thousands of miles away.
"Sentayehu knew that my cousin Derartu Tulu ran," says Dibaba. "He knew that my sisters ran too, that's why he encouraged me to start running. He used to tell me that I would be a great runner. He knew I would be a fast runner that's why he started coaching me."
For Dibaba, representing a country with such a distinguished athletics history brings a feeling of great responsibility.
"Our country is not like other countries," says Dibaba. "You should bring back gold when you compete for Ethiopia. The people don't accept anything less, the people won't be happy with anything less.
"Silver and bronze in our country is no better than finishing fifth or sixth. I want to make people happy and therefore think of finishing first. My heart pounds when I think of this, and that why I train hard, to make the people happy."
Driven by a strong sense of duty and a strong desire to produce successful athletes, Eshetu shows no signs of stopping. Instead, he's always keeping an eye out for the next rising star to come out of Bekoji's rich crop.
"Running for Ethiopia is a movement that has shown the world where we are, what we can do and who we are as a people," says Eshetu.
Posted by Guihon at 9:16 AM No comments: