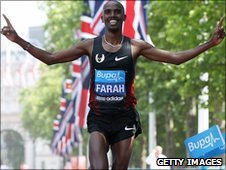 The European record which Farah broke had stood for 13 years
Mo Farah stunned a top-class field by setting a new British and European 10,000m record at the Eugene Diamond League meeting in Oregon.
The 28-year-old's time of 26 minutes 45.57 seconds wiped six seconds off Mohammed Mourhit's previous European record, dating back to 1999.
He also bettered Jon Brown's 13-year-old British record of 27:18.14.
"That was awesome. I wanted to break the British record," the Somalia-born Farah told BBC Radio 5 live.
"I was really confident and I knew if I could stay in the group I could work my way through and see what I could do on the last lap."
Farah, who won the 5,000 and 10,000m at last year's European Championships, finished just ahead of Ethiopia's Imane Merga, whose time of 26:48.35 was a new personal best.
"I want a world (championship) medal and showed here that if I keep working hard I will be in the mix," added Farah, whose previous fastest time was a 27:28.26 set last year.
"This is definitely a special track. If it wasn't for the crowds I would never have done this. With three laps to go I knew I had the chance for the record."
Farah appears to be benefitting from a move earlier this year to the United States where he began working in Oregon with Alberto Salazar, who won three successive New York marathons.
"I wasn't even looking to win this race. I just wanted to run a good time. Alberto told me before the race I was ready to run under 27 minutes and I just used my patience," stated Farah.
Another notable performance of the evening saw Kenya's Moses Mosop break the 30-year-old world record for the rarely-run 30,000 meters.
The 25-year-old clocked a time of 1:26:47.4, breaking the previous record of 1:29:18.8 set by Japan's Toshihiko Seko in 1981.

Posted by Guihon at 3:06 AM No comments: