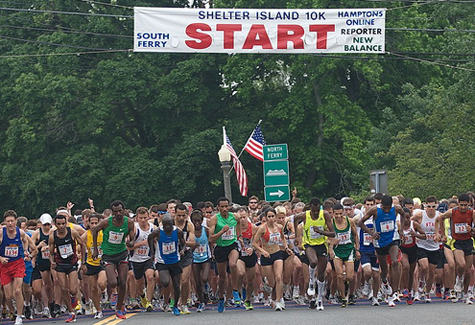 GARRET MEADE PHOTO | African runners once again figured prominently in the Shelter Island 10K Run, which was held for the 32nd time on Saturday.
African runners must like something about Shelter Island because they keep winning, posting quality times and dominating in the small island’s annual 10-kilometer race.
Kumsa Adugna, 25, of Ethiopia, who was the runner-up last year, was the winner this time around in the 32nd annual Shelter Island 10K Run on Saturday. Adugna, running a 4-minute 47-second mile pace, bolted across the finish line, completing the course in 29:44. He nudged out Harbert Okuti of Uganda by two seconds and third-place Keteme Nigusse of Ethiopia by three seconds in a close finish.
“I’m happy. I like,” Adugna, whose English is limited, told reporters afterward.
Adugna ran with the lead pack the whole way. He was first among a distinct group of six runners at the front that was later whittled down to three. Adugna, who said he felt confident, took the lead for himself on the grass during the final sprint to the finish line. 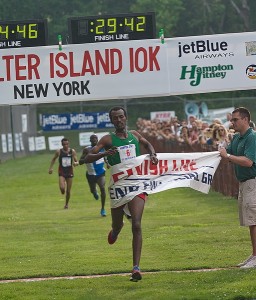 GARRET MEADE PHOTO | Kumsa Adugna of Ethiopia, a runner-up last year, posted a winning time of 29 minutes 44 seconds.
Seven of the top eight finishers were Africans. Girma Tolla of Ethiopia was fourth in 30:04, Mourad Marofit of Morocco was fifth in 30:24, Abiyot Endale Worku of Ethiopia was sixth in 30:49 and Demesse Tefera of Ethiopia was eighth in 32:50.
Tefera followed seventh-place Birhanu Feysa of Silver Springs, Md. (31:18).
The first Long Islander was Matt Walsh of Wantagh. He was ninth in 34:52, which was 13 seconds ahead of 10th-place Christopher Koegel of Malverne.
Even the women’s champion had an African connection. Although Tezaya Dengersa, 30, is Turkish, she lives in Ethiopia with her husband and their two children.
In clocking a winning time of 34:17, Dengersa for the first time finished ahead of her rival, second-place Malika Mejdoub of Morocco, who turned in a time of 34:40.
Dengersa said she pushed herself as hard as she could. Perhaps she needed to. Speaking of Mejdoub, Dengersa said, “She’s strong.”
Mejdoub said the two of them ran the first three miles together before Dengersa made her move.
“Actually, I didn’t run well,” Mejdoub said. “I was tired a little bit this week, but it’s O.K. I took second place. I’m happy.” 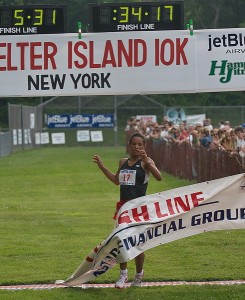 GARRET MEADE PHOTO | Tezaya Dengersa, a Turk who lives in Ethiopia, won the women's race in 34 minutes 17 seconds.
Caroline Bierbaum of New York City came in third at 34:43. Michele Buonora of Sayville was the first Long Island woman with a time of 40:52 that brought her 10th place.
Not counting Dengersa, Mejdoub was one of four Africans to place among the top eight in the women’s race. Among them were Salome Kosgei of Kenya (fourth in 36:15), who was followed by Aileen Barry of New York City (37:41) and Jane Finck of New York City (38:47). The next three female finishers were Muluye Gurmu of Ethiopia (38:57), Ilham Batal of Morocco (39:19) and Jenny Malik of Rochester (40:18).
The event featured the most former Olympians it has ever had — four — with Bill Rodgers, Joan Benoit Samuelson, Tolla and Dengersa taking part. Other big names from the running world participated, including Kim Jones and Jon Sinclair.
“There are so many good runners today,” said Rodgers, who won four Boston Marathons, four New York City Marathons and ran the marathon in the 1976 Olympic Games in Montreal. “It’s not like 30 years ago, and so many good, older runners today, all ages, and that’s what you see here.”
Among the field of 22 elite runners were seven Ethiopians, four Moroccans, a Ugandan and a Kenyan. Dr. Frank Adipietro, the race’s medical director, said, “I’m going to have to say this is the strongest field we’ve had in the 32-year history of the race.”
The warm, sunny weather earlier in the day changed as the 5:30 p.m. starting time approached. It got cloudy, protecting runners from the sun, but there was still humidity to deal with.
As the runners made their way along the American-flag-lined course, with trees offering welcomed shade for some of the way, smiling spectators lining the route offered refreshments, applause and encouragement. “It’s a celebration of our sport,” said Samuelson, who won the first Olympic women’s marathon in 1984 in Los Angeles.
Still, the conditions were apparently not right for a record, like the course record Alena Reta of Ethiopia set in 2010 when he won the race for the second time in four years, clocking a time of 28:40.
Many reasons can be attributed to the Africans’ fine record in long-distance running. Samuelson gained a firsthand appreciation for that a few weeks ago when she visited Kenya.
“I was really impressed with the way they trained,” she said. “They just run everywhere. If I went for a run, kids would jump off the backs of trucks or would run out of the schoolyard and they would run alongside us.”
The affable Rodgers, who figures he has run some 165,000 miles over the course of his career, made his third appearance in the race as part of a celebrity pace group.
“I was glad to not have to push as hard as I could because this was hard enough,” he said. “I’m getting a little creaky.”
bliepa@timesreview.com
Posted by Guihon at 5:52 AM No comments: