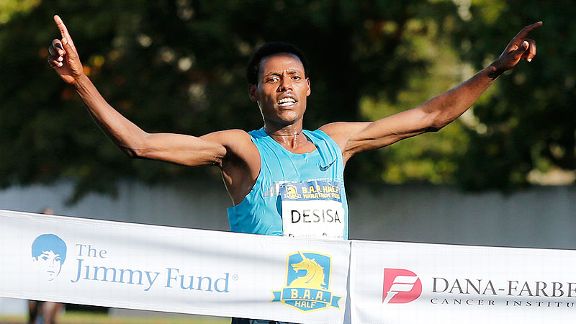 AP Photo/Michael DwyerLelisa Desisa is among the favorites after winning both the full and half-marathons in Boston in 2013.
The elite men's field for the 2014 Boston Marathon includes some of the biggest names in distance running, including the defending Boston champion, record holders from some of the biggest marathons around the world and several big-name Americans.

Last year's winner is a good candidate to be the first back-to-back men's champion since 2008. Desisa has run only three marathons, all in 2013; in addition to Boston, he won his debut in Dubai and was second at the world championships in August. He's shown he can race well on any type of course, and in either a fast or tactical race. In his most recent race in mid-February, Desisa led eight men who finished under an hour to win a highly competitive half-marathon in the United Arab Emirates. Desisa's chances rise the longer the lead pack stays together.
Dennis Kimetto (Kenya), 2:03:45 PR (Chicago, 2013)

The fastest man in the field broke the Chicago Marathon course record by almost a minute last October. His PR makes him the third-fastest person in history on a record-eligible course. Two things keep us from tabbing Kimetto as the overwhelming favorite. First, his three career marathons have been on flat, fast courses instead of something with Boston's ups and downs. Also, he missed a key half-marathon tuneup race in February with an ankle injury, then ran only 64:56 at a half-marathon in March. If Kimetto is healthy, look for him to push in the Newton hills to get a clear break from the field.
THE CONTENDERS
Micah Kogo (Kenya), 2:06:56 PR (Chicago, 2013)

Kogo finished second at Boston last year in his marathon debut. He dropped his PR to 2:06:56 in finishing fourth at Chicago in October. His trajectory is the sort that has led to many Boston victories. Kogo has won an Olympic bronze medal in the 10K and formerly held the world road record for the distance.

Regassa is a good example of the young, fearless racers who have defined world-class marathoning in recent years. After debuting in 2:05:27 at Chicago in 2012, the 24-year-old won Rotterdam last spring, also in 2:05. Regassa has won many top shorter events on the U.S. and international road circuit.
Wilson Chebet (Kenya), 2:05:27 PR (Rotterdam, 2011)

One way to pick potential winners is to focus on those with a history of winning. In that case, keep an eye on Chebet, who has won Amsterdam three times and Rotterdam once, each in 2:05. In his one Boston appearance, Chebet was fifth in 2012. It's hard to know if that was because he's only good on pancake-flat courses like Amsterdam and Rotterdam, or if he was affected more than his competitors by that year's heat.
Gebre Gebremariam (Ethiopia), 2:08:00 PR (New York City, 2011; also 2:04:53 on point-to-point Boston in 2011)

Gebremariam won his debut marathon in New York in 2010, but since then hasn't been able to convert being with the leaders late in the race into a victory. He wound up third of the trio that were together in the last mile last year.
Markos Geneti (Ethiopia), 2:04:54 PR (Dubai, 2012)

Geneti should be either really fit or really tired. In January, he placed second at the Dubai Marathon in 2:05:13, just 17 seconds off the PR he set there two years ago. Geneti won his marathon debut in Los Angeles in 2011. He hasn't won since, and was sixth here last year.
Lusapho April (South Africa), 2:08:32 PR (Hanover, 2013)

A 2:08 guy might seem out of his league among all the sub-2:06 runners in this year's field, but April finished third at New York City last November among another seemingly superior field. As at New York City, finishing high on Boston's ever-changing course is usually more about racing smart than running fast.
THE AMERICANS
Ryan Hall, 2:06:17 PR (London, 2008; also 2:04:58 on point-to-point Boston in 2011)

Hall enters as both the fastest American and the biggest question mark in the field. His 2:04:58 here in 2011 is the fastest American time on the course by more than three minutes. But the last marathon Hall finished was the Olympic trials in January 2012. Since then, he's dropped out of the Olympics and missed Boston once and New York City twice because of injury. To prep for this year's Boston Marathon, Hall trained at altitude in Ethiopia. He hasn't raced at any distance since last August. Hall says he's had his best training in a long time for this year's race. Still, it's anyone's guess what he'll do Monday.
Meb Keflezighi, 2:09:13 PR (Olympic Marathon Trials, 2012)

Keflezighi will be a few weeks away from his 39th birthday on race day, but we learned long ago never to bet against him. His most recent marathon, a 2:23 at New York City last November, was by the far the slowest of his career. But in the past few years, Meb has also twice set a PR, won the Olympic Marathon Trials and placed fourth at the 2012 Olympics. So far this year, he's won the U.S. half-marathon title in January, and placed 10th in a world-class field at last month's NYC Half.
Jason Hartmann, 2:11:04 PR (Chicago, 2011)

Hartmann was the first American, and fourth overall, the last two years at Boston. His recent consistency ended at New York City in November, where he dropped out. If he's fit, look for him to lay off the fireworks up front and, as in 2012 and 2013, pass overly aggressive early racers in the closing miles.
Nick Arciniaga, 2:11:30 PR (Houston, 2011)

Arciniaga won the 2013 U.S. title with his victory at October's Twin Cities Marathon, a second-place finish at the 2011 Houston Marathon and an eighth-place finish at the 2012 Olympic Marathon Trials. But he's also had some disastrous marathons. He dropped out of Boston in 2012 after doing some of the early leading.
Brett Gotcher, 2:10:36 PR (Houston, 2010)

Like his former training partner Arciniaga, Gotcher has been inconsistent throughout his marathon career. His PR dates from his debut in 2010. He placed fifth at the 2012 Olympic Marathon Trials but hasn't run a good marathon since.
Jeffrey Eggleston, 2:12:03 PR (Chicago, 2013)

Eggleston has run in the last two world championship marathons, so he won't be intimidated or spooked into doing something silly by the strong international field. Don't be surprised if he moves into the top 10 once some of the men gunning for the win fall apart.
Abdi Abdirahman, 2:08:56 PR (Chicago, 2006)

A strong performance by the four-time Olympian would be a surprise. Abdirahman hasn't finished a marathon since placing third at the Olympic Marathon Trials in January 2012
Posted by Guihon at 11:37 AM No comments: