Unusual Trend Spotted Between Marathon Runners and Their Age | TheBlaze.com


Photo credit: Shutterstock
A recent study found that they are actually likely to finish in about the same amount of time.

The study out of Camilo José Cela University in Madrid demonstrated that the relationship between marathon runners times and age is represented by a U-shape graph.

“While the rate at which performance drops is moderate until the age of 55, from then on the drop becomes sharper in both male and female runners,” lead author Juan Del Coso Garrigós said.

Based on these findings, elite marathoners should consider a long-term training program that would allow them to achieve maximum performance in their late 20s."

Posted by Guihon at 2:28 AM No comments:

Mamitu Daska, of Ethiopia, runs through the finish line tape as the first female finisher in the international team race at the 36th Annual Bolder Boulder 10K road race on Memorial Day, May 26, 2014. (Lindsay Pierce, The Denver Post)

BOULDER — Mamitu Daska is unquestionably the current queen of the Bolder Boulder's elite women's 10K race.
The Ethiopian won her fourth title Monday well ahead of the rest of the field, finishing in 32 minutes, 21.63 seconds. She also won in 2009, 2010 and 2012 and was the runner-up in 2011. Only Portugal's Rosa Mota has more career Bolder Boulder victories with five.
Even with temperatures in the high 60s, and even with a hard early pace from Deena Kastor, Daska felt the pace was too slow. So she took off down the left side of a long straightaway before the first mile while the rest of the women followed the inside curve of the road.
The champion "did good training and felt the pace was easy at the beginning," Daska said through a translator.
That set the tone: If you want to win, prepare for bold moves and a long grind over the scorching pavement of this rolling, high-altitude course.
PHOTOS: Thousands run in Colorado's 2014 Bolder Boulder 10K
Shalane Flanagan, who most recently finished as the top American in the Boston Marathon, tried in vain to move with her. But the gap only grew with each passing mile — five seconds at mile one, then nine at two miles, 16, 22, 28 — until the finish: 43.48 seconds. Flanagan and Daska ran nearly the entire race solo.
"I think she knew I probably didn't have the adaptation to altitude, so I was a little cautious, even though that felt really fast for me," Flanagan said. "So I tried to be as cautious as possible but not give away the race. I didn't want to hand it to her. But I tried to keep her within distance to see if she faltered and misjudged herself."
About halfway through the race, Flanagan realized Daska wasn't coming back.
"At that point, the competitor in me — it was hard to let that go," she said. "But I was worried about the team aspect, and I was wanting to safely hold second for my team."
With Kastor's fourth-place finish and Sara Hall's 16th-place finish — a race Hall described as the most challenging she had ever run — the American women's Red team finished third behind Ethiopia and Kenya.
For Daska, there was only one regret: not breaking the course record of 32:13, set in 1995 by Kenya's Delillah Asiago in cool, rainy conditions.
"She says it's very difficult to run alone," Daska's translator said. "If she had other people, it would help her push the pace, and she would run a better time.
"She knows this course very well. She was planning to break the course record, but because of the hot weather, she wasn't able to."
Would she come back to try again?
"Yes, she hopes so," her translator said. So does Cliff Bosley, co-race director and co-founder.
Kastor, 41, turned in another stirring fourth-place finish. The roaring crowd of tens of thousands rose to its feet as she entered Folsom Field, a sign of respect for a woman whose status as a running legend becomes more solidified with dominant performances each passing year.
"My husband and coach, Andrew Kastor ... told me to take it out hard because we live at a higher altitude than Boulder," said Kastor, of 7,880-foot Mammoth Lakes, Calif. "So I knew that it was my intention to take the sting out of the rest of the field. In taking the sting out of myself the rest of the way, I was suffering quite a bit during the race."
Daniel Petty: 303-954-1081, dpetty@denverpost.com or twitter.com/danielpetty

The first wave of runners takes off from the starting line with over 50,000 racers registering this year. The 36th BolderBoulder takes place on the streets of Boulder, CO on Memorial Day, May 26, 2014. The 10K event brings winds through the streets of Boulder and finishes at Folsom Field on the ..

SHAREADJUSTCOMMENTPRINT
It was a record-setting weekend in Ottawa.
A record 47,500 athletes in total registered for Tamarack Ottawa Race Weekend events, up from about 44,000 last year. Some 7,000 runners enjoyed perfect weather Sunday morning for the 40th annual Scotiabank Ottawa Marathon, Canada’s biggest marathon event. Another 12,500 ran the half-marathon.
“We’re thrilled,” said Race Director John Halvorsen of the turnout as the weekend wrapped up. “It’s a great way to celebrate our 40th anniversary.”
Ethiopia’s Yemane Tsegay shattered records Sunday, finishing with a time of two hours, six minutes, 54 seconds. It was the fastest marathon ever run on Canadian soil and shaved more than a minute off the Ottawa Marathon record set last year by another Ethiopian, Tariku Jufar.
Tigist Tufa, also from Ethiopia, was the fastest woman in Sunday’s marathon, with a time of 2:24:31. She beat her own personal best by more than 3 1/2 minutes and beat last year’s record by almost a minute.
Posted by Guihon at 3:18 AM No comments:

Great Manchester Run 2014 part 1
View gallery
Former Manchester United and Everton defender Phil Neville was among the 40,000 entrants and admitted he struggled midway through the run before he finished in 45:58.
The 37-year-old former England international, said: "I started off too fast. From 4km to 7km I was struggling.
"I was actually looking for an ambulance at one point."
Posted by Guihon at 1:22 PM No comments:

Great Manchester Run 2014 part 1
View gallery
Former Manchester United and Everton defender Phil Neville was among the 40,000 entrants and admitted he struggled midway through the run before he finished in 45:58.
The 37-year-old former England international, said: "I started off too fast. From 4km to 7km I was struggling.
"I was actually looking for an ambulance at one point."
Posted by Guihon at 1:22 PM No comments: 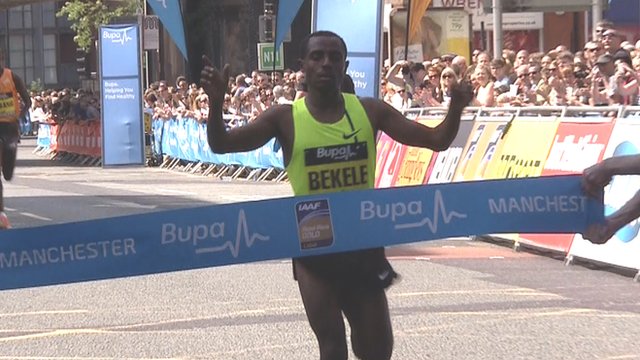 Ethiopia's Kenenisa Bekele saw off the challenge of Wilson Kipsang to take victory at the Great Manchester Run.
The 5,000m and 10,000m world record holder ran in 28 minutes and 23 seconds with marathon world record holder Kipsang of Kenya five seconds back.
World and Olympic 10,000m champion Tirunesh Dibaba earned a comfortable victory in the women's competition, finishing the 10km course in 31:09.
Play media 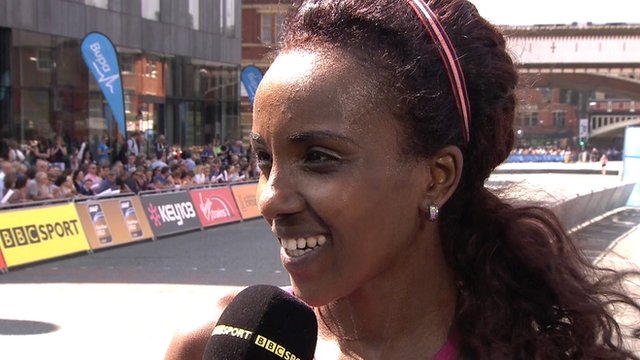 Dibaba wins Great Manchester Run
Britain's Gemma Steel was second, more than a minute behind Ethiopian Dibaba.
Polline Wanjiku closely challenged Steel on the line, but vocal support saw the 28-year-old run home ahead of the Kenyan in 32:10.
"That really lifted me, I was fighting for that silver and it's good to see that I can sprint when I have to," Steel told BBC Sport.
"It's good to establish myself in these races again, I feel at home in them. To come back and finish behind Dibaba, who is the best in the world, you can't complain about that."
Three-time Olympic champion Bekele, making his British 10k road debut, was matched by Kipsang until the closing stages but a late burst of acceleration in the final 400m earned him victory. South African Stephen Mokoko was third.
Among the 40,000 entrants at Europe's biggest 10km running event were former footballers Phil Neville, Michael Gray and Robbie Savage, soap stars Julie Hesmondhalgh and Denise Welch, and former snooker world champion Shaun Murphy.

Also related to this story

Posted by Guihon at 1:15 PM No comments: