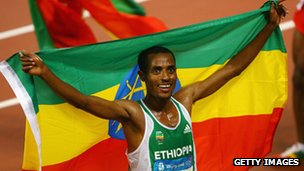 A country's position on the medals table generally reflects its place on the UN's Human Development Index.
But while Ethiopia lies 157th on the HDI with an index of 0.33, it came 29th in the 2008 Games with seven medals.
The research uses data on economic development, political conditions and medal totals from Beijing 2008.
It was carried out by the Institute for Democracy and Conflict Resolution (IDCR) at the University of Essex.
In 2008 the USA, with a high score of 0.9 on the HDI, was the top performer in the Games with a total of 110 medals, while athletes from poor countries such as the Democratic Republic of Congo, close to the bottom of the HDI with a score of 0.24, went home without any medals at all.
Games politics

Professor Todd Landman, director of the IDCR, said the Games were a display not just of human skill, strength and agility, but also of the conditions under which athletes have grown up and trained.
"It is important to reflect on the politics and economics that shape the Games, as well as the many challenging obstacles that this year's dedicated athletes have had to overcome to take part," he said.
He told the BBC the research showed the many benefits that accrue from countries that are well governed and have a more equitable process of development.
Continue reading the main story

"Across many facets of life, not just athletic performance, the great variation in socio-economic and political conditions around the world have a profound impact on human achievement," said Prof Landman.
He added that Ethiopia's Olympic success was largely in long distance running events, which was partly explained by the country's culture and history.
The IDCR and a partner, the Mackman Group, has developed web-based maps which allow users to see the relationships between Olympic success and deeper social or economic conditions.
Countries with big populations such as China and the USA may top medal tables, but even after population size has been taken into account, the relationship between development and medal totals is a significant one, says the IDCR.
Posted by Guihon at 10:56 AM No comments: