For good measure, Ethiopian winners in half-marathon as well.

The Chevron Houston Marathon and Aramco Half Marathon on Sunday were wet and windy as expected. And as also might have been expected, the day’s four champions were all Ethiopians, though not, due to the conditions, in times as quick as organizers might have liked. As Race Results Weeklyreports, the women’s half-marathon winnerMamitu Daska observed, “At a point the rain was so bad we couldn’t see.”
The day’s best performance, which involved racing through standing water in some spots, came from 20-year-old Merima Mohammed, who left her compatriot Buzunesh Deba, the 2011 New York City Marathon runner-up, in her wake at 33 kilometers and won the women’s marathon in 2:23:37, with Deba 49 seconds behind. Mohammed (seen above on a drier day), hit halfway in 1:10:56, and managed her winning time even though, as she told reporters, “I had a problem with my leg. It was a very painful situation.”
Tera Moody was the first American, sixth in 2:39:11, and lamented, “That second half was really, really rough.” Kelly Calway of the U.S. took seventh in 2:41:53.
Bazu Worku led an Ethiopian sweep of the first six places in 2:10:17, afterward remarking, “The weather was not cooperating with us.”
Andrew Carlson, the top American man in seventh place, in 2:17:16, declared, “Clearly, it wasn’t the time I was looking for.” He added, “There’s so many excuses you could make on a day like today, but I don’t want to make them. The thing I will take away from it is that I got it done.” Americans Scott Wiectechaand Sergio Reyes were ninth and tenth in 2:18:53 and 2:19:27, respectively.
Feyisa Lelisa repeated as half-marathon champ, winning a two-way battle withDeriba Merga by six seconds in 1:01:54. A $50,000 bonus was available if Zersenay Tadese’s world record of 58:23 was broken, but Lelisa realized that the conditions made that time impossible and decided, “I just want to win.”Shadrack Biwott, a U.S. citizen since June, was fourth in 1:02:23, while Luke Puskedra finished fifth in 1:02:23 and Aaron Braun sixth in 1:02:32.
Daska, the marathon winner in Houston in 2011, won Sunday’s half-marathon by more than two minutes in 1:09:53. Kenya’s Caroline Kilel was second in 1:11:58. Lisa Uhl, a 2012 Olympic 10,000-meter runner, was the first American, sixth in 1:13:28, despite falling early in the race and having to stop to put a shoe back on.
Posted by Guihon at 1:40 PM No comments:

This year’s Boston Marathon will likely be another East African-dominated race up front, given the strong women’s and men’s international fields that race organizers announced this morning.
Defending women’s champion Sharon Cherop of Kenya will face a strong trio of Ethiopian women on April 15. The fastest of the bunch is Asalefech Mergia (seen above), who set her 2:19:31 PR while winning last year’s Dubai Marathon in a course record. She’ll be joined by 2012 world half-marathon champion, Meseret Debele, who won last October’s Amsterdam in a PR and course record of 2:21:09 two weeks after her world half-marathon win, and Mamitu Daska, a former Houston Marathon winner with a 2:21:59 best. Daska enters her Boston training cycle fit, as she won last Sunday’s Houston Half Marathon by more than two minutes.
Cherop’s strongest Kenyan compatriot should be Rita Jeptoo. She won Boston in 2006 and then overcame several sub-par years by placing second at Chicago last year in a personal best of 2:22:04.
The women’s field also includes Tetiana Gamera-Shmyrko of Ukraine, who was fifth in last August’s Olympic Marathon; Alemita Begna of Ethiopia, the course record holder at the Houston Marathon; and Madai Perez, whose 2:22:59 PR is the Mexican record.
The top American women in the field are 2012 Olympic marathoners Shalane Flanagan and Kara Goucher. Last week Serena Burla, who has a 2:28:27 PR, and Stephanie Rothstein-Bruce, who has a 2:29:35 PR, were added to the field.
Men’s defending champion Wesley Korir might need another hot day like last year to overcome runners with faster PRs. Although he improved his personal best to 2:06:13 at Chicago last fall, the Kenyan has only the ninth fastest PR in the field.
Moses Mosop’s 2:03:06 best is the fastest in the field. He ran that (tailwind-assisted) time to place second at Boston in 2011 in his debut at the distance. Mosop, who has world records for 25,000 meters and 30,000 meters on the track, was scheduled to run last fall’s New York City Marathon. When that race was canceled, he opted to return to training rather than find a replacement race. Along with Korir and Mosop, the marathon’s strong Kenyan contingent includesLevy Matebo, second at Boston last year and owner of a 2:05:16 PR, andDickson Chumba, an up-and-comer who set his 2:05:46 PR last fall.
Markos Geneti is the strongest Ethiopian in the men’s field. He won Los Angeles in 2011 in his marathon debut, and last year set his personal best of 2:04:54. Gebre Gebremariam, winner of the 2010 New York City Marathon, was third at Boston in 2011, but hasn’t been as impressive in his more recent marathons.
Two intriguing marathon debutants at Boston will be Micah Kogo and Lucas Rotich, both of Kenya. Kogo is a former world record holder for 10-K on the roads, and won the bronze medal at 10,000 meters in the 2008 Olympics. He set his half-marathon best of 59:07 last year. Rotich also has a sub-60:00 half-marathon PR (59:44) and great track credentials, including a 26:43 10,000-meter best.
Last week race organizers announced a strong American men’s contingent. Led by the three men who made the 2012 Olympic Marathon team—Meb Keflezighi, Ryan Hall, and Abdi Abdirahman—it also includes Jason Hartmann, fourth at Boston last year, and national 25-K record holderFernando Cabada.
Posted by Guihon at 1:35 PM No comments: 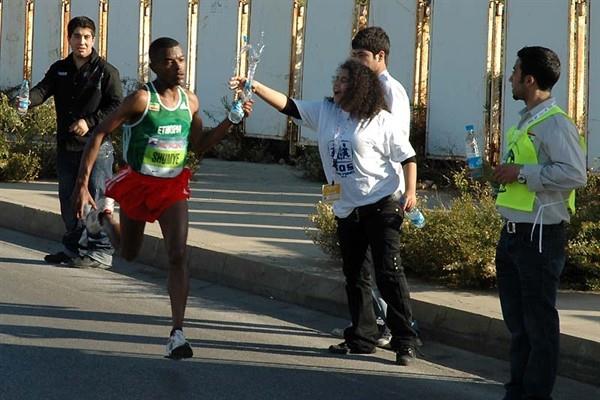 The IAAF is saddened by the news that Ethiopian marathon runner Alemayehu Shumye died in a car crash on Friday (11). He was 24.
His marathon career began in 2008 with much promise and in his first three races at the distance he won in Vercelli, Warsaw and Beirut.
His lifetime best, 2:08:46, was set at the 2009 Frankfurt Marathon where he finished fifth. His most recent Marathon victory came at last year’s Gold Coast Marathon.
Shumye competed just six days before the car crash, finishing 10th in Xiamen with a time of 2:12:57.
IAAF
Posted by Guihon at 12:30 PM No comments: