By
KEVIN HELLIKER and 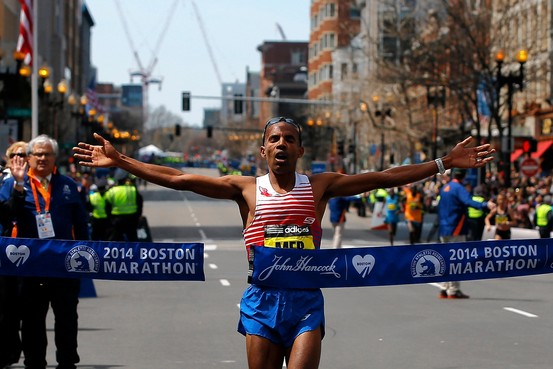 Meb Keflezighi reacts as he wins the Boston Marathon on April 21. Reuters
How Meb Keflezighi ran his fastest-ever marathon only days shy of his 39th birthday is a mystery that will inspire other runners for decades.
Also certain to endure is the mystery of how Keflezighi's less-than-spectacular time succeeded in winning last week's Boston Marathon, amid a field of Kenyans and Ethiopians who completed that race several minutes behind their usual pace.
"It's hard to explain why several Kenyans and Ethiopians didn't run quite a bit faster," said Ambrose Burfoot, an editor at Runner's World and winner of the 1968 Boston Marathon.
Burfoot sees nothing conspiratorial about the outcome, which gave the U.S. its first male winner of the Boston Marathon since 1983.
But some others do. A LetsRun.com comment thread called "The Boston Marathon Was Fixed" drew about 450 posts, about 40 times higher than the average thread on that site. Many commenters called it suspicious that a relatively modest American performance won the first Boston Marathon after last year's bombings. "All of the 14 faster people had a bad day and could not reel (Keflezighi) in…the year the whole world and especially the USA have their eyes on the Boston Marathon," noted one skeptic.
"That so many faster runners would all fall apart on the same day just doesn't make sense," said Raymond Britt, publisher of an endurance-race statistics firm called RunTri.com. "The odds against that seem astronomical."
These skeptics represent a distinct minority and offer no serious explanation for why runners from impoverished nations would give up their shot at Boston's $150,000 first-place prize. Davor Savija, agent for Wilson Chebet, the Kenyan who took the $75,000 second-place prize, said in an email that the more-elite runners in the field "underestimated" Keflezighi and got caught up "focusing on each other."
As for Keflezighi, his manager and brother, Merhawi Keflezighi, said of the competition: "Meb's performance and strategy made them lose."
By all accounts, the men's race last week was peculiar. Conditions on race morning were so favorable—with temperatures in the 40s at the start—that four women broke their gender's 12-year-old course record. Winner Rita Jeptoo of Kenya knocked nearly two minutes off the old record with a finish of 2 hours, 18 minutes, 57 seconds.
By contrast, Keflezighi's winning time—2:08:37—fell 5 minutes, 35 seconds behind the men's three-year-old course record.
"On a beautiful day on which four women broke the women's course record, no one in the men's field could come within 5.5 minutes of the course record. That is hard for the casual sports fan—or even pretty hard-core running fan, really—to grasp," said Robert Johnson, a LetsRun.com founder who understands but doesn't share the belief that something fishy occurred.
Early in the race, when Keflezighi ran ahead of a pack of mostly elite Ethiopians and Kenyans, they neglected to react. By mile 18, Keflezighi's lead had stretched to about 80 seconds. Some observers and top finishers say that these runners simply failed to "respect" Keflezighi, feeling certain he would fade, as he did last November at the New York City Marathon. "It is well known that eastern African athletes don't consider early breaks by non-eastern African athletes as a serious threat," said Savija, Chebet's agent.
"They just underestimated Meb," said Andrey Baranov, agent for Vitaliy Shafar, of the Ukraine, who finished fourth. "We believe Meb just posted a beautiful race. I don't think they tried to let him go."
Then, a paralysis of sorts developed among the Kenyan and Ethiopian elite, according to Savija, the agent for the runner-up Chebet. The African "group was ready to move, but nobody wanted to lead the way," Savija said.
Among runners with the fastest personal bests, two Kenyans and two Ethiopians didn't finish the race. Several others finished far off their best times, according to a RunTri.com analysis.
Around the 20-mile mark, Chebet broke loose, erasing all but about 10 seconds of Keflezighi's lead over the next 5 miles. With about 1½ miles left, an analyst calling the race for Universal Sports Network marveled at Chebet's charge, saying, "This is heading in the wrong direction for Meb Keflezighi."
In the final mile, however, Chebet faded, essentially running out of gas, according to his agent. Chebet finished 11 seconds behind Keflezighi. "If his closing 2,195 (meters) were as expected, we would be talking about probably the least favorite guy in Boston now," Savija said.
Not everyone is convinced. Britt, a 13-time Boston Marathon finisher who was working the race as a writer and photographer, said film and photos of the finish raise questions about why Chebet suddenly stalled. "That close, you don't just tire out," Britt said.
Also unclear is why top runners wouldn't respect Keflezighi, who finished fourth at the 2012 Olympics, won the 2009 New York City Marathon and took silver at the 2004 Olympics.
Most observers believe that Keflezighi's Boston race demonstrated once again the hare's tendency to underestimate the tortoise. "Meb has made a habit of feasting at the expense of better runners, but lesser racers," wrote running blogger Toni Reavis, adding that Keflezighi's faster competitors simply underestimated "an aging, but still dangerous opponent."
Write to Kevin Helliker at kevin.helliker@wsj.com and Sharon Terlep at sharon.terlep@wsj.com.
Posted by Guihon at 2:52 AM No comments: