Yanet Seyoum Gebremedhin strokes across a public swimming pool in Addis Ababa, calmly gliding past, and around, leisurely swimmers as they frolic along her path, determined not to lose her focus.
In Ethiopia, athletes are usually associated with the graceful, wiry figures of the nation's long-distance runners rather than with any other sports.
So when Ethiopia's soon-to-be first female Olympic swimmer struts her stuff in the chilling waters of the Ghion Hotel's 50-metre pool ahead of the London Games, few pay attention apart from her civil servant mother Tsigework Abebe, who uses a mobile telephone to time her daughter's laps.
"There are no lanes here. Everyone does whatever they want," she told Reuters while standing by the side of the pool, the interview drawing newfound attention. "You really have to mind your pace."
Born in the northern town of Kombolcha, the 18-year old Yanet was drawn to swimming at the age of 12 with her family taking occasional leisure trips to the area's only pool.
The child from a country famous for producing world-beating runners like Haile Gebrselassie and Kenenisa Bekele soon discovered she had talent and started competition a year later against rivals twice her age.
Five years and dozens of domestic titles later, she will participate in the 50 metre freestyle in London, granted under the Games' universality policies.
A male colleague has also been awarded a spot in London.
"I feel proud for representing my country for the first time at the Olympics. It's a big deal," she said.
DOMESTIC DOMINANCE
Yanet, an engineering student, has already won 40 gold, five silver and two bronze medals while competing in domestic events ranging from participation in 50 metres to 5,000 metres.
She has also taken part in two World Championships, a World Youth Olympics and an All-African Games event in the last three years.
Though her chances of taking a leaf out of her running compatriots' books is unlikely, she hopes to turn into a bona-fide contender as the years go by.
Yet, there is a serious dearth of facilities in landlocked Ethiopia. 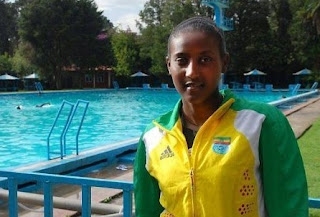 Only a handful of swimming pools exist throughout, often manned by former navy personnel as life savers, who were rendered jobless following the secession of Eritrea, a former province along the Red Sea, in 1993.
Yanet relies on a trainer of the same mould, though she is reduced to just making phone calls for training tips as he lives 100 kilometres away.
"I'm working hard for her, in a field I barely know anything about," Tsigework said of her daughter's training regimen.
"I come straight from work and push her to work hard and not miss training, but it's her coach who gives her the real direction."
Yanet's finest hour came at the world short course championships in Dubai, clocking a personal best of 32.87 seconds, something she would be aiming to better in the London pool.
"To be a winner first you have to improve your time."
(Editing by George Obulutsa and Greg Stutchbury)
Posted by Guihon at 1:11 AM No comments:

Town of Runners
The screening benefits library construction in Yirgacheffe and Bekoji, Ethiopia, by Ethiopia Reads.
When: 7 p.m., Aug. 7.
Where: Sundance Theater, 510 Texas.
Tickets: $26.20; brownpapertickets.com.
Information: ethiopiareads.org.
For the past six years, Houstonians have watched promising Ethiopian runners fly through the city in pursuit of greatness.
Ethiopians have won the women's division of theChevron Houston Marathon since 2007. They've also been first in the men's race for five of the past six years. Three of them - Dire Tune, Deriba Merga and Teyba Erkesso - went on to win the Boston Marathon months after triumphing here.
And just as many elite Kenyan runners come from the same area - the Rift Valley - so do Ethiopian runners - in their case, the country's southern highlands.
One village in particular stands out. In the past 20 years, runners from the rural town of Bekoji - population 16,000 - have won eight Olympic gold medals and 32 world championships. They have also broken 10 world records.
Promoting literacy
"Town of Runners," a new British documentary, travels to Bikoji to follow the journey of three up-and-comers who hope running is their path to a better life. The movie will be presented Aug. 7 in a screening to benefit Ethiopia Reads, a nonprofit group that promotes literacy. The event will include conversations via Skype with director Jerry Rothwell and Adam McDowell, who ran in the men's Olympic marathon trial in January.
Young residents of Bikoji, particularly girls, have few opportunities beyond subsistence agriculture. But under the guidance of a local former gym teacher, Sentayehu Eshetu, some have escaped rural poverty. Among them is Derartu Tulu, who became the first African woman to win an Olympic gold medal in 1996.
Still, the path is not easy. Rothwell followed his subjects for three years, documenting their successes - and failures.
Their stories would resonate with anyone, but with runners in particular, the event's organizer says.
"It is an opportunity to think about how one becomes a runner and why. It gives us an opportunity to reflect on and maybe challenge how we train," said Jay Stailey, a Houston runner and Ethiopia Reads volunteer.
Global community
Stailey, a retired school principal and part-time storyteller, became involved with Ethiopia Reads during a month-long trip to the country last year with children's book author Jane Kurtz.
After Stailey returned, he saw a flyer promoting Ethiopia Reads in a local Starbucks, where manager Angela Lara was trying to raise $10,000 for a library in Yirgacheffe, Ethiopia, a coffee-producing area. So they teamed up.
Stailey said a silent auction in November brought in about $5,000. He raised another $1,400 on his own by collecting pledges for a half marathon in Washington, D.C., earlier this year. He calculates that if the film sells out, they'll surpass their goal and be able to start funding a library in Bikoji as well.
"Runners should come to this film, because by coming together, we are reminded of our membership in this local running community, as well as our membership in a much-larger global running community," Stailey said.
Posted by Guihon at 12:37 AM No comments: