NYC Marathon Finalists Ready, Set …
Geoffrey Mutai, 32, of Kenya has won the 2013 NYC Marathon with an unofficial time of 2:08:24 with room to spare. Ethiopian Tsegaye Kebedecame in second at  2:09:15.
“Today it was a very tough race. To win a race for the first time is easy, to defend your title is not easy,” he told ABC 7 after his win. He said the winds were hard to run against.  He said it is important to “respect yourself as an athlete.”
Priscah Jeptoo, 29, of Kenya has won for the women’s division with an unofficial time of 2:25:07. Buzunesh Deba of Ethiopia came in second with a time of 2:25:57.

“I am very happy to be in New York for the first time,” Jeptoo said. “This means a lot to me.”

Official times for the women’s title. (Screenshot/ABC7)
Priscah Jeptoo, Kenya: 2:24:07
Buzunesh Deba, United States (NY): 2:25:56
Jelena Prokopcuka, Latvia: 2:27:47
Christelle Daunay, France: 2:28:14
Valeria Straneo, Italy: 2:28:22
Kim Smith, United States (RI): 2:28:49
Sabrina Mockenhaupt, Germany: 2:29:10
Tigist Tufa Demisse, United States (NY): 2:29:24
Edna Kiplagat, Kenya: 2:30:04
Diane Nukuri-Johnson, Unites States (IA): 2:30:09
See other top female finishers
——————–
It is Jeptoo’s first time in the New York City Marathon. She told New York Road Runners (NYRR) before the race: “I’ll try to use my tactics usually that I use when I’m in the race, but you know this is my first time to be here. So I’ll try to also to run good.” She is a 2012 London Olympic marathon silver medalist.
Mutai told NYRR he couldn’t compare this race to the 2011 NYC Marathon, which he won:  ”I’m feeling okay. The only thing I can compare with it is after the race because to compare is not easy. You cannot test shape by talking about it until after.”
Mutai broke a world marathon-running record in 2011 with his time of 2:05:06. Mutai coaches himself and other runners in small-town Kenya. He is a father of two and has 10 siblings.
Buzunesh Deba, a New Yorker born in Ethiopia was leading the women and was ahead of Jeptoo by as much as three minutes half way through the race. She vomited, showing signs of weakening coming up on the 20th mile, where they say the race really begins, though vomiting is not uncommon in marathons. Jeptoo pulled ahead in the last two miles to win.
Heading into the marathon Sunday, the two top favorites for the women’s run were Kenya’s Edna Kiplagat and Jeptoo. But Deba was also thought to have a good chance. She would have been the first New Yorker in 39 years to win. She was four seconds shy in 2011, finishing the race in 23 minutes and 15 seconds.
Firehitwot Dado of Ethiopia pulled ahead of her in that race, winning the women’s title.
RELATED: Dado and Deba Speak Before the Race
Kiplagat told New York Road Runners: “This is one of the best courses. It’s not a flat course. It needs a lot of strategy and a lot of mental strength. And I’m happy when I’m on it. It’s still very fresh in my mind, the whole course. I’m confident I can win on Sunday.”
With the temperature in the low 30s, it’s a chilly day for the spectators, and the runners faced a headwind. Some 2 million spectators followed their progress along the 26.2-mile course running through New York City’s five boroughs. The runners are not the only stars, with more than 135 bands and performers playing from the sidelines.
Security is tight. NYPD chief Ray Kelly has said the security planning began on April 16th, just after the Boston Marathon bombing. A new standard has been set for marathon security. Thousands of cameras are in place, 43 bomb-sniffing dogs are making the rounds, and Kelly reports that no specific threats have been identified.
With more than 30 Olympians mingling on the course with amateur runners, totaling some 50,000 in all, the New York City Marathon brings together a diverse crowd.
After the annual marathon was cancelled last year due to Superstorm Sandy, this year’s marathon doubles as a memorial for both the victims of the Boston Marathon bombing and the victims of Sandy.
Mayor Michael Bloomberg asked spectators to remember the victims during an interview with ABC. He said, “It’s been a long time coming between this year and last year.”
Tatyana McFadden has won for the women’s wheelchair race. She already won the Boston, London, and Chicago marathons this year, making her the first to win all four major U.S. marathons in one calendar year.
Marcel Hug of Switzerland won the men’s wheelchair race. Ernst Van Dyk of South Africa came in second, and Kurt Fearnley of Australia came in third.
Check back for updates.
Posted by Guihon at 1:24 AM No comments:

Jeptoo Wins in a Sprint From Behind on Buzunesh Deba of Ethiopia - NYTimes.com 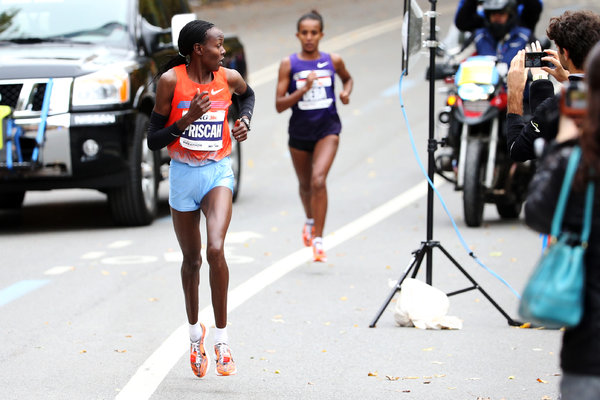 Around Mile 24, Jeptoo, 29, overcame Buzunesh Deba of Ethiopia, who had dominated most of the race. Jeptoo’s victory, in 2 hours 25 minutes 7 seconds, came with $600,000 in prizes for winning the race and the world majors title.
Deba, who finished 49 seconds behind Jeptoo, was seeking to become the first New York City resident to win the marathon since the race expanded to all five boroughs in 1976. After crossing the finish line, Deba was met by her husband and trainer, Worku Beyi, and knelt at the barrier, draped in the Ethiopian flag, visibly disappointed. She also finished second here in 2011.
“The crowd, they really helped me a lot because they were cheering, joyful, and also they were helping me, telling me, ‘You are closing the gap,’ ” Jeptoo said. “ ‘Go, go, go, move.’ So they helped me a lot.”
Deba added, “I’m so happy.”
But that was not necessarily the case during the race, as Deba coped with a chilly wind and stomach pains.
“She told me she was good from the beginning,” Beyi said at the finish line as Deba was escorted out of Central Park, flanked by security. “And there were no problems, but I think in those last two miles, she got tired. There was a lot of wind.”
Deba, 26, has called New York City home for eight years. She is from Asella, in the central region of Ethiopia, which has produced several distance-running titans. Many of her peers on the road Sunday had traveled to higher altitudes to train. Deba went to Albuquerque but soon returned to New York, citing homesickness.
She now lives in the Bronx, not far from the marathon course, and runs on the paths of Van Cortlandt and Central Parks. She opted to stay in a hotel in Manhattan over the weekend to be closer to race-related events.
Kenyan women were the prerace favorites, including Edna Kiplagat, the current world champion, and Jeptoo, the runner-up in the 2011 world championships and the 2012 London Olympics. But from the start, the race belonged to Deba and her training partner, Tigist Tufa, another Ethiopian.
To make ends meet in the United States, Deba worked as a babysitter and ran in her free time as she learned English, sometimes by watching the news on television. Beyi said that they still enjoy Ethiopian food with friends, but that Deba noshed on macaroni and chicken Saturday night and had bread and a banana for her race-day breakfast. She began to compete in marathons in 2009.
Using a bold strategy, Deba and Tufa led the race from the start, running miles at a 5-minute-40-second pace and creating a two-minute gap from the main pack by Mile 5. It was all according to plan, Deba said, for the two to lead strong and stay close to each other. The rest of the women ran at a slower pace, an indication of the headwinds on a crisp morning.
Deba and Tufa extended their lead as they blazed through Brooklyn and reached the halfway point, snaking toward Queens.
Later, Jeptoo said she had realized she was more than three minutes behind them.
“I knew, and I was having confidence that I will make it,” she said.
The Kenyan Mary Keitany used a strategy similar to Deba’s in the 2011 New York City Marathon. She held a significant lead at the halfway point but slowed drastically in the second half and was overtaken by Firehiwot Dado, the eventual winner, and Deba, four seconds behind. Keitany finished third.
On Sunday, however, Deba and Tufa ran slower than Keitany’s 2:23:38 in 2011. By the time Deba and Tufa crossed the lonely and quiet stretch over the Queensboro Bridgearound Mile 16, the race looked as if it belonged to them, with Jeptoo in third place about four minutes behind.
Although Deba said she started to feel persistent stomach cramps around Mile 8, she ran along First Avenue in Manhattan looking calm and collected. Jeptoo continued to push ahead and ultimately overtook Tufa at Mile 22. Tufa faded, finishing eighth in 2:29:24.
As Deba entered Central Park, she noticed Jeptoo over her shoulder, a few seconds behind. Deba’s face tightened, and Jeptoo bounded past her around Mile 24 and maintained the lead with her distinctive stride, legs splayed, flying in the face of what most biomechanists consider ideal for distance runners. But Jeptoo’s gait worked for her as she sprinted toward the finish line to a roar of cheers.
Jelena Prokopcuka of Latvia, who won the race in 2005 and 2006, was third in 2:27:47. It was a strong showing for Prokopcuka, 37, who had not run here since 2007.
“I’m really happy because my dream has come true,” Prokopcuka said. “I really wanted to be on the podium.”
The top American woman was Adriana Nelson of Colorado, who finished 13th in 2:35:05.
Deba’s next goal, Beyi said, is to run the Boston Marathon in April. Although her second-place finish Sunday was not exactly what she had hoped for, Deba said she felt good about the race over all.
“Bronx is my home, and I’m so happy,” Deba said. “I want to say thank you, Bronx.”
Posted by Guihon at 1:13 AM No comments: