ALL PAGES RELATED TO THIS ARTICLE 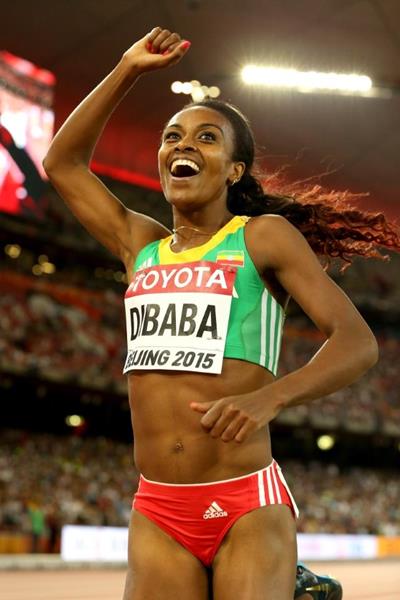 It took little more than four minutes for Genzebe Dibaba to run the full 1500m distance, but the damage was all done in the last two.
Or, more specifically, the 1:57.2 with which she covered the final 800 metres.
The opening pace was slow with USA’s Shannon Rowbury and Jenny Simpson leading the field through the first lap in 1:17.06. Defending champion Abeba Aregawi was close behind but Dibaba was near the back. Britain’s Laura Muir moved up behind the US pair after the first 400m.
The pace continued to dawdle for the following 300 metres, but Dibaba then made her move with two laps to go.
Simpson, the 2011 world champion, got caught up amid the movement in the pack and lost one of her shoes. But Dibaba was away and gone.
She covered the penultimate lap in 57.4 but still had company in the form of Aregawi, Dawit Seyaum, European champion Sifan Hassan and Commonwealth champion Faith Kipyegon, so she kept her foot on the pedal during the next lap.
Although her pace slowed in the closing stages, her rivals were beginning to feel the effects of trying to stick with Dibaba over the previous 400 metres. One by one, their challenge began to crumble. Dibaba, meanwhile, crossed the line in 4:08.09 to win her first – and long awaited – outdoor senior global title.
Kipyegon had moved into second place with 200m to go, only for Hassan to overtake her as she came into the home straight. But the Kenyan clawed back the deficit just before the finish line to take second place in 4:08.96. Hassan held on for third in 4:09.34.
Seyaum finished fourth in 4:10.26 while Muir came through for fifth place in 4:11.48, having overtaken Aregawi on the final lap.
It may have been the slowest winning time in World Championships history, but few women over the years would have been able to stick with Dibaba on the final two laps.
And not only did Dibaba win Ethiopia’s first ever gold in the 1500m, men’s or women’s, at the World Championships, but she also became the first woman to concurrently hold world indoor and outdoor records and world indoor and outdoor titles.
Now she can turn her attention to the 5000m when she bids to make more history. Based on tonight’s form, it would take a brave person to bet against her.
Posted by Guihon at 11:18 AM No comments: