Abebech Bekele crosses the finish line of the women’s Chevron Houston Marathon to win with a time of 2:25:52 on Sunday. (Cody Duty / Houston Chronicle)
By Dale Robertson and Jason McDaniel
Abebech Bekele of Ethiopia held on to win the women’s race in 2:25:52. It was her first-ever victory in a marathon, although she has run faster previously. She staved off a late challenge by two of her countrywomen to also earn $40,000 with her victory.
“I’m really happy and excited, coming to Houston,” Bekele said. “This is my first marathon to win but I participated in four other marathons.”
The Houston women’s record is 2:23:14, set by Alemitu Abera also two years ago.
Ethiopian men have won the last six Houston races and seven of eight. Ethiopian women extended their winning streak to eight.
“Houston’s importance has increased tremendously, and winning here has given us that energy and that love for Houston,” Bekele said. “I think Houston is one of the (most-respected) places among the Ethiopian runners at this time.”
The top American woman finisher was Heather Tanner, but she didn’t crack the top 10 overall.
The 2014 Houston Marathon weekend

Image 14 out of 78
Runners in the lead pack cross a bridge on Westpark just past mile 12 of the Chevron Houston Marathon. ( Smiley N. Pool / Houston Chronicle ) 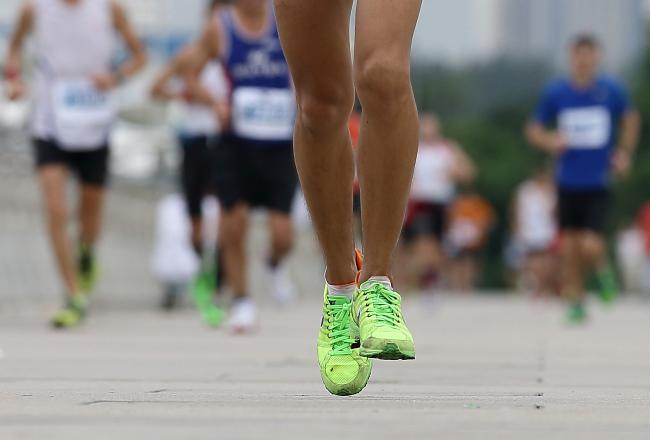 Suhaimi Abdullah/Getty Images
Ethiopian Bazu Worku took home the men’s victory at the 2014 Houston Chevron Marathon Sunday, Jan. 19, with a dominant time of two hours, seven minutes and 32 seconds.
Fellow Ethiopian Getachew Terfa finished in second with a time of 2:07:54, and Mexico’s Jose Antonio Uribe finished third with a time of 2:07:54.
It was an exciting edition of the race, as Ethiopian Abebech Bekele made a late surge and stole the victory on the women’s side, amassing an impressive time of 2:18:27.
Here is a look at the top finishers from the men's classification:
Source: HoustonMarathon.com
Here is a look at the top finishers from the women's classification:
Source: HoustonMarathon.com
*All results via HoustonMarathon.com.
While there is plenty of praise to go around for an impressive event, there is no discounting how dominant Worku’s performance was. As Dale Robertson of theHouston Chronicle tweets, the Ethiopian won on and off the course:

Worku did not manhandle his competition as many expected, though, with Terfufinishing just 22 seconds off his pace. Still, the two Ethiopian stars were the class of the field, with third-place finisher Uribe finishing 83 seconds off Worku’s winning pace.
As if winning first and second place on the men’s side wasn’t enough, Ethiopians DadiYami Gemeda and Senbeto Geneti managed to finish fourth and eighth respectively, totaling four top-10 finishers from Ethiopia.
The Ethiopian women also dominated the event.
Not only did Bekele win, but fellow Ethiopian women Meskerem Assefa, Gelete Burka,Biruktait Degefa and Makda Haji also performed at an elite level, rounding out the top five respectively.
Jose de Jesus Ortiz of the Houston Chronicle reveals where Bekele’s performance ranks all time:

While it was clear that the nation of Ethiopia stole the show—Sunday’s win was the seventh in eight years for the men and the eighth consecutive victory for the women—the runners from the United States performed at a high level as well.
On the men’s side, Ian Burrell and Tim Young finished seventh and 10th respectively. On the women’s side, Heather Tanner was the sole representative of the United States in the top 10, finishing in ninth place.
The race was a grand spectacle that featured the city of Houston and its inhabitants rallying around the athletes. With top-level performances making the day even more impressive, this year’s event will be remembered as one of the best.
Posted by Guihon at 2:30 AM No comments: