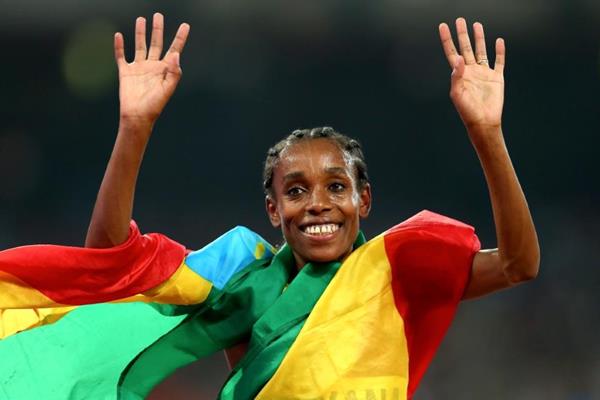 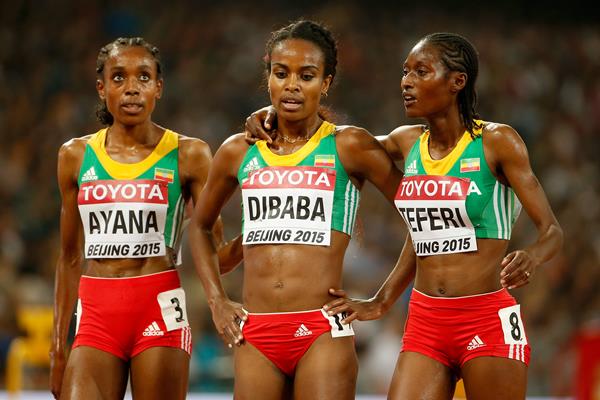 How do you solve a problem like beating Genzebe Dibaba in the 5000m?
Easy – just run the final 3000m in 8:19.92.
Easier said than done, of course, as no woman has managed to defeat Dibaba this year. She has broken world records indoors and out, dominated the IAAF Diamond League circuit and looked invincible when winning gold in the 1500m earlier in the week.
But her fifth race of the championships proved to be one run too many, because when world leader Almaz Ayana made her move, Dibaba was unable to respond.
As is often the case in major championship distance races, Japanese athletes led during the opening stages. Misaki Onishi took the field through 1000m in 3:01.65 and then team-mate Ayuko Suzuki led as the field passed 2000m in 6:06.27 with the first 10 athletes running in single file.
It was then that Ayana made her move.
She hit the front and was immediately followed by Dibaba. Another lap later, it was still the Ethiopian duo out in front with a gap to Kenya’s Mercy Cherono in third. Ethiopia’s Senbere Teferi and Kenya’s Viola Kibiwot were further back, having broken away from the rest of the chasers.
Ayana reached 3000m in 8:55.63, having covered the previous kilometre in 2:48.71, and was starting to pull away from Dibaba – a sight previously unseen anywhere in the world this year.
And just when the moments of self-doubt were starting to creep in for Dibaba, Ayana ratcheted up the pace. She churned out a 2:43.62 kilometre to reach the 4000m point in 11:39.25, more than five seconds ahead of Dibaba. Further down the field, Teferi and Kibiwot had caught Cherono.
Ayana continued to pull away from Dibaba on the last two laps and was away and clear, crossing the line in a championship record of 14:26.83 with the biggest 5000m winning margin in World Championships history, having covered the final 3000m in 8:19.91.
Teferi and Kibiwot were locked in their own private battle for the medals, and in doing so they caught up with Dibaba on the home straight.
Dibaba tried to dig in to salvage at least a silver, but Teferi – running on fresher legs – caught her just before the line to take silver in 14:44.07, just 0.07 ahead of a disappointed Dibaba. It was Ethiopia’s second medal sweep in this event at the IAAF World Championships, having filled the top four places in Helsinki in 2005.
Behind the Ethiopian trio, Kenyan athletes covered the next four spots. Kibiwot was fourth in 14:46.16 ahead of her more favoured compatriot Mercy Cherono, who ran 15:01.36. Janet Kisa and Irene Cheptai followed in 15:02.68 and 15:03.41 respectively.
Susan Kuijken of the Netherlands completed the top eight with her time of 15:08.00.
Posted by Guihon at 6:19 AM No comments: 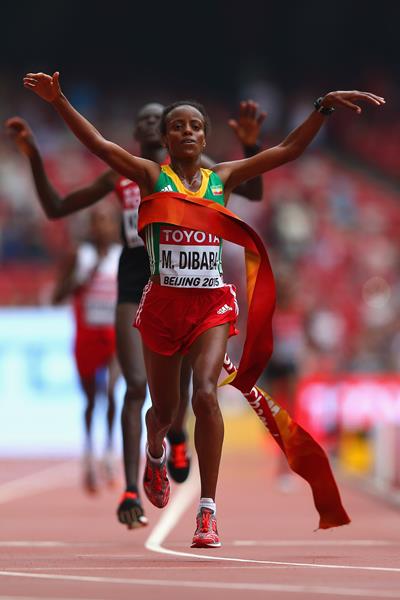 Posted by Guihon at 4:12 AM No comments: