Kenyans watch out : Tirunesh Dibaba Is Back | Competitor.com

Beware, Kenyans: Tirunesh Dibaba Is Back

She is pleased with her comeback from injury. 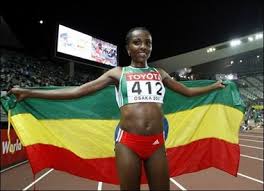 Tirunesh Dibaba is back in action for Ethiopia. Photo: Daily Nation
With all the focus on Kenya’s dominance in the distance-running world, a bright spot exists for rival Ethiopia. Her name isTirunesh Dibaba and she’s officially back.
Dibaba, who is a double Olympic champion, recently won the 47th San Silvestre Vallecana in Madrid, Spain on New Year’s Eve. This victory was especially sweet for the Ethiopian, because she had been sidelined the past six months due to injury.
In the Madrid race, a 10K, Dibaba edged outfellow Ethiopian Gelete Burka at the tape to win in 31 minutes and 30 seconds. The New Year’s Eve race was the first competition for Dibaba since August of last year and the official beginning of her build-up for the 2012 London Olympics.
Behind Dibaba and Burka in the Madrid race was Briton Susan Partridge who took third in 32:44. Fourth place went to the 2009 World steeplechase champion, Marta Dominguez.
The men’s race was won by a surprise contestant: the 17-year-old Ethiopian, Hagos Gebrehiwot.
For More: Daily Nation
Posted by Guihon at 2:19 PM No comments: