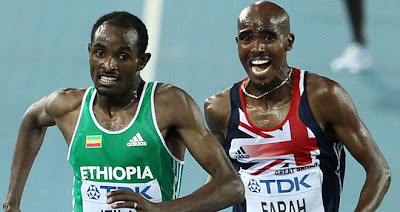 Two prominent Ethiopian opposition politicians have been detained, at least one of them on terrorism-related charges. But opposition leaders are questioning the charges, saying the detentions appear politically motivated.
Bekele Gerba
Government spokesman Shimeles Kemal says senior opposition figure Bekele Gerba was detained Saturday, charged with having ties to the newly-outlawed Oromo Liberation Front, or OLF, which is fighting for independence for Oromos, Ethiopia’s largest ethnic group.

"Bekele Gerba was arrested, detained by the Federal Anti-Terrorist Task Force in his alleged connection with his involvement with the recently proscribed terrorist organization OLF," said Shimeless.

Bekele, an English teacher at Addis Ababa University, is a member of the executive committee of Ethiopia’s main opposition coalition, Medrek, and deputy chairman of the Oromo Federal Democratic Movement (OFDM).
Olbana Lelisa

Medrek leaders say another prominent Oromo opposition politician, Olbana Lelisa of the Oromo People’s Congress, was also detained. It was not immediately clear whether Olbana was also charged with terrorism.

Mogga Frissa, who currently serves as chairman of both Medrek and OFDM, says both men were involved in external communications for their parties. In that capacity, they had been disseminating data about drought and malnutrition in remote regions of southern Ethiopia, data that sometimes contradicts government information.

Mogga said Bekele in particular had told of the arrests of people who had supplied information for a recent BBC news report. That report alleged Ethiopia has used billions of dollars in development aid as a tool for political repression.

"Bekele was talking about the famine in Ethiopia, and people were giving information to these people," said Mogga. "He heard some people who gave information to the BBC have been imprisoned in [the] south. So we suspect this is the cause."

Ethiopia’s government strongly denied the BBC report, calling it irresponsible. A statement posted on the foreign ministry website noted that opposition parties and the group Human Rights Watch had made the allegations previously, and they had been found to be groundless.

The statement argues that allegations of aid misuse are aimed at persuading donors to cut off assistance, at a time when millions of people are suffering from one of the worst droughts in decades.
Opposition: Detentions a "witch hunt"

Veteran opposition leader Beyene Petros was among those quoted in the BBC report. In a telephone interview Tuesday, he said he stands by allegations of aid abuse. Beyene called the arrests of Bekele and Olbana part of a “witch hunt” that will have a chilling effect on anyone who might provide embarrassing information to the press.

"They are harassing our supporters and people down in the south, especially one individual whom they alleged has been guiding them to some locations where the BBC reporters obtained information," said Beyene. "The government has dispatched security operatives to the area trying to dig up charges against individuals providing information, which the government finds sensitive and wants to hide."

The latest arrests come at a time when two Ethiopian journalists who were critical of the government are facing charges of involvement in terrorist activities. Those arrests have raised concerns from international human rights and press freedom groups, who say the pretext of terrorism is being used to silence dissent.

Prosecutors, however, allege the journalists were involved in plot to sabotage electricity and telephone lines, and say the charges have nothing to do with their professional activities.
Posted by Guihon at 5:55 AM No comments:

Sky Bet are offering everyone a Free £10 Bet
Claim your free bet now
Great Britain's Mo Farah has been given the go-ahead to take part in the 5,000m at the World Championships.

The Somalia-born athlete narrowly missed out on an anticipated gold medal when he was caught by Ibrahim Jeilan of Ethiopia in Sunday's 10,000m.

Farah always had the 5,000 to fall back on although he was never going to commit to 'doubling-up' until after Sunday's race.

And despite suffering from blisters, the medical team has given the 28-year-old the go-ahead to take his place in Thursday's heats, with the final coming on the final day of competition on Sunday.
Posted by Guihon at 5:46 AM No comments:

(Reuters) - Edna Kiplagat was tripped by a team mate but got back on her feet to lead a Kenyan podium sweep in the women's marathon and claim the first gold medal of the world athletics championships on Saturday.

The 31-year-old policewoman raced on with a skinned and bloody knee, breaking clear of compatriots Priscah Jeptoo and Sharon Cherop over the last two kilometers to win her first world title in two hours, 28 minutes and 43 seconds.

Kenya's domination of the podium represents the first time any nation has swept the medals in the marathon, men or women, at the world championships.

"This is my first championships I have run and I am happy I have won it," Kiplagat told reporters.

"I didn't have any special strategy, I just tried to speed up at 32 km... probably the Ethiopians could not stick with me after that."

Kiplagat, who finished third at this year's London marathon and won in New York last year, was sent sprawling by Cherop after she had broken free of the field with her fellow Kenyans and Ethiopian Aberu Kebede.

Kiplagat had cut in front of her team mate at the drinks station and toppled over when their legs made contact. Cherop immediately stopped to help her up, however, and the incident failed to disrupt the eventual champion's rhythm.

"It was a bit stiff and painful but I had to forget about it and run," she told Reuters after the race.

"A bit of blood was coming out... I was surprised and I didn't know if I was going to finish the race."

Jeptoo finished 17 seconds behind Kiplagat in 2:29.00 for silver with Cherop just holding off Kebede for bronze in 2:29:14.

Cherop said she was not to blame for Kiplagat's fall but felt no hesitation in getting her team mate back to her feet.

"I was so annoyed because it was not my fault," she told a news conference. "But after I saw my friend had fallen I had to stop and help pick her up."

Cloud cover and a light breeze helped mitigate the effects of the high humidity in the South Korean host city but the first 35 kms were run at a steady pace as Kenyans, Ethiopians and Japanese runners jostled each other in a large leading group.

Kiplagat led the breakaway at a searing pace just after the 35km mark and, despite her stumble, covered the next five kilometers in 16 minutes, 11 seconds to effectively assure her of victory.

Her husband and coach, Gilbert Koech, said he was overjoyed with the result.

"I am so proud of what she has achieved here," he told Reuters. "I didn't see her fall at the drinks station but one of the good things about her is that she is mentally strong under any kind of pressure.

"We are focusing 100 percent on the London Olympics now."

Posted by Guihon at 2:32 PM No comments:

Do Feet Need To Run Free? | Swervecalgary.com – Calgary event listings, contests, restaurants, entertainment listings, what to do in Calgary, the insider's guide to Calgary

Do Feet Need To Run Free?

Even in a climate prone to snow it’s hard to ignore all the hype around minimalist footwear. The question begs to be answered: should you dare to run bare?

Where have all the swooshes gone?

A growing number of runners have kicked off their shoes to run barefoot or while wearing what appear to be gloves for the feet. (These last enthusiasts perhaps realize that pampered urban feet need protection and that even the few millimetres of material offered by minimalist shoes can make a big difference while still replicating the barefoot experience.)

Unlike typical running shoes with their padded heels, true minimalist shoes like the Vibram FiveFingers and Vivobarefoot (starting from $90 at MEC, Gord’s Running Store, Riva’s Eco Store) have little or no heel height. Advocates say the resulting stride, in which the foot strikes the ground not on the heel but on the forefoot, is closer to our natural gait and reduces the risk of injury, increases running efficiency and strengthens the foot. (Major shoe companies like Nike, Saucony and New Balance have also launched pared-down shoes.)

Of course, this new trend is in fact very old. Adam and Eve ran barefoot in the Garden of Eden, but in more recent history Ethiopia’s Abebe Bikila won the Olympic marathon in 1960 and 1964 while running barefoot, and in the mid-1980s Zola Budd competed barefoot for South Africa and the U.K.

The current resurgence is in no small part due to Christopher McDougall’s 2009 book Born to Run: A Hidden Tribe, Superathletes, and the Greatest Race the World Has Never Seen. McDougall describes his experiences among the Tarahumara Indians of Mexico. The Tarahumara run hundreds of miles at a time over mountainous terrain, while wearing thin sandals fashioned from old tires. Inspired by the tribe members’ amazing feats and relatively injury-free record, McDougall adopts their technique and ultimately rejects the tricked-out running shoe with its air-injected foam, chunky heel, cushiony sole, gel pods and other “innovations.”

After suffering from back pain and hip spasms for six months due to over-exerting herself running and doing yoga, Melanie Jones (a Calgarian now living in New York) switched to a pair of Vivobarefoot Evos last spring. “What I really like about my shoes is that I can feel the ground. I figured out that my feet are sense organs and they’re trying to get feedback from the earth. They’re telling me to be gentle.”

It’s important to recognize that minimalist shoes make the midfoot stride easier to learn and that runners need to adapt their form to complement the shoe, says Gord Hobbins, owner of Gord’s Running Store. The transition must also be gradual to reduce the risk of developing such injuries as calf strain, Achilles tendonitis and stress fractures.

Meanwhile, others question the whole trend. Benno Nigg, founder of the Human Performance Lab at the University of Calgary, calls the barefoot-is-better chatter “hype” and “dogma.” There’s no conclusive evidence, he says, that heel-landing is bad for you, a lighter shoe is advantageous or barefoot runners are less at risk of developing injuries.

In other words, if it feels good do it. Now that’s a message everybody can run with.

Posted by Guihon at 8:36 PM No comments: