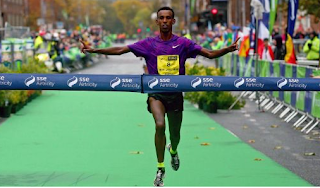 Over 15,000 people tackled damp and drizzly conditions on 26.2 mile route

Mon, Oct 26, 2015, 15:17
First published:Mon, Oct 26, 2015, 09:04
Finishers are crossing the line at the end point of the 2015 SSE Airtricity Dublin Marathon with Alemu Gemechu claiming the honours in the men’s race.
The Ethiopian finished in a time of 2 hours and 14 minutes, seconds ahead of Kenya’s Francis Ngare.
His compatriot Eliud Too, last year’s winner, finished fourth and Seán Hehir was the highest achieving Irish runner in the men’s category. Hehir came home just under the 2 hour 20 minute mark, finishing in ninth place. Ukraine’s Nataliya Lehonkova comfortably claimed the women’s honours, and wheelchair racer Patrick Monahan from Kildare was the first individual to pass the finishing post this morning as he claimed an expected victory in a time of 1 hour and 43 minutes.
Over 15,000 runners embarked on the 26.2 mile route over the course of this morning, and the city centre was abuzz with colourful costumes and luminous tracksuits from the early hours as participants of all abilities wound their way towards the initial meeting point at Fitzwilliam Street.
Spectators gathered at barriers along the route despite
overcast and damp conditions with mild temperatures.
A heavy band of rain will cross the country from the southwest today, but is not expected to arrive in Dublin until early evening, by which time most runners will already have completed the course which stretches from the city centre to the Phoenix Park, down to Templeogue and Belfield and back to Merrion Square.
Temporary road closures and public transport diversions are in place across vast swathes of the city, and heavy restrictions will be in place in parts of the south inner city, including Merrion Square, Fitzwilliam Square, Holles Street and Mount Street in particular.
Adjustments will be made to most Dublin Bus services operating southbound from the city centre to accommodate the event, which is now in its 36th year, and Luas passengers on both lines should expect delays during the morning.
This year also marks the last time the marathon will take place on a Monday for the foreseeable future at least, as organisers last week announced plans to move the 2016 event to a Sunday.
The change is being made to attract more participants from Britain and Northern Ireland, as there is no October bank holiday observed in those jurisdictions.
However, some 2,000 participants from Britain and Northern Ireland are expected to take part in this year’s race.
Posted by Guihon at 10:22 AM No comments: