Sport Racism Kenyans were the stars of the London marathon - that's not boring Mmegi Online ::

Kenyans were the stars of the London marathon - that's not boring
When an African runner wins a marathon, we tend to overlook their achievement. Let's give them the credit they deserve.

London witnessed another swashbuckling performance by Kenya's incredible marathon runners on Sunday. Kenyan athletes finished in the top three places in the men's race (despite their biggest star, Olympic champion Sammy Wanjiru, pulling out just weeks before the race), and also first and third in the women's race.

It began as a trickle - when Joseph Nzau won the Chicago marathon in 1983 - grew into a river, and has now become a roaring, unstoppable torrent. Last autumn, out of 42 elite men's marathons, 38 were won by Kenyans and four by Ethiopians. The spring marathon season has so far been an even more dominant story, with Kenyans winning the men's and women's prizes in virtually all of the big races so far, from Paris to Rotterdam, London to Dubai. This is all great news for Kenyans. I watched yesterday's London marathon in a packed bar in Eldoret, in Kenya's Rift Valley. It was like watching a football match, with the bar full of cheering, whistling fans. But for the rest of the world, all this dominance is becoming a problem. Not only are all the other runners being left for dust, but there is a gnawing fear among race organisers and, crucially, sponsors and advertisers, that global TV audiences are finding it all a bit boring. Just recently, the world cross country championships, which have been held annually since 1973, were changed to a biennial competition. The reason? East African dominance is killing interest in the event. And now the Utrecht marathon in the Netherlands has decided it has had enough. After four Kenyan victories in the past four years, it has applied the old adage: if you can't beat them, get rid of them. Last week it was revealed that the event organisers have used a grossly unbalanced prize money system as a way to "discourage" Kenyans from running.


By offering a Dutch winner Û10,000 against a mere Û100 to any foreign winner, the organisers say they are only trying to give local athletes a chance, but the move sets a dangerous precedent. Athletics Kenya has reacted furiously, asking all Kenyan athletes to withdraw from the race in protest. Such dominance in sport is not usually seen as a problem. Take Roger Federer, Tiger Woods or Manchester United, for example. No one has ever sought to exclude them from a major competition on the grounds they are too good. In fact, the opposite is usually true.


They are welcomed as sporting heroes. Usually, we love to watch the very best going head to head. But when the very best are all African, suddenly it becomes a problem. It's hard not to think there is an element of cultural ignorance going on here.


Africa is another world, I was once told when I started working for a national television news programme. Things happen there that would be huge stories if they happened in other parts of the world, but really, people are not interested in Africa. This may be part of the problem. We in the west just can't empathise with these runners. We have no understanding of their backgrounds, where they've come from. They just show up, win and disappear. In many ways sport is like a soap opera, and it is only when you get to know the characters involved that you begin to revel in the drama. But rather than relate to the top African runners as individual characters, each with their own back stories and personalities, the tendency is to lazily lump them all together as "the Kenyans" or "the Ethiopians".

Perhaps the athletes are partially to blame. Most Kenyan runners are shy when placed in front of the post-race press conference microphone. There are no Usain Bolt arrows, or Christian Ronaldo pouts. They are on the whole quiet and reserved. Yes, perhaps a little media training wouldn't go amiss.

But considering just how dominant these runners are, in the world's most accessible sport, how many of us can even name more than one or two Kenyan runners? Is there really a will to find out about them? Or is it the case, like the news stories, that we don't really want to know? If marathon running is a soap opera, then right now it's in the midst of one of its most gripping episodes. Particularly in men's marathon running, the winning times are getting faster and faster at an incredible rate. Just this week, BBC Radio 4 ran a programme on how soon we will see a sub-two hour marathon. These guys are quietly pushing back the boundaries of the most universal of sports, and all we can do is complain that it's boring.

One common response to their performances is to attribute their dominance to genetics, despite recent studies failing to find any genetic uniqueness to the people of Kenya or Ethiopia. Blaming genetics is an easy way out. There's nothing we can do, we say, throwing up our arms. The die comes pre-loaded. But blaming racial differences undermines the incredible dedication, focus and effort these runners are putting into their sport. It undermines their brilliance. 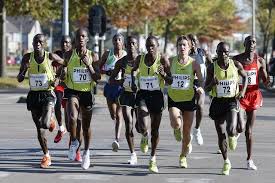 So rather than watching Sunday's race and saying, "oh, another Kenyan has won", I propose as sports fans we see Emmanuel Mutai and Mary Keitany as individuals. We remember their names, and we celebrate their performances, as we would the victors in any other major sporting event. Guardian (UK)
Posted by Guihon at 8:21 AM No comments: