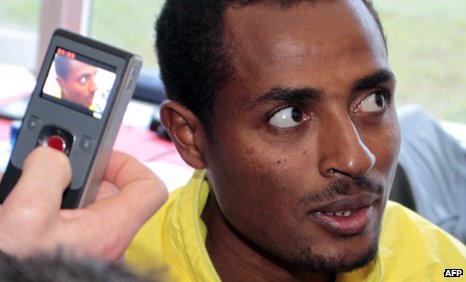 Kenenisa Bekele is the reigning Olympic 5,000 and 10,000 metres champion

Ethiopia's Kenenisa Bekele, one of Mo Farah's main Olympic rivals, has been suspended by his governing body.
The Olympic 5,000m and 10,000m champion has been banned from competing, along with 34 other athletes.
The Ethiopian Athletics Federation (EAF) said the athletes had not attended a mandatory training camp.
Technical director Dube Jilo said: "There is a lack of commitment and our preparations haven't been up to standard so far."
The EAF summoned 200 athletes in November to a training camp in preparation for the World Indoor Championships in March and the London Olympics in July and August.

Bekele holds the world record and Olympic record in both the 5000 metres and 10,000 metres events.
He is the reigning Olympic champion in both events and also won the 2004 Olympic title over 10,000 metres.
However, Bekele and 34 other athletes, including Olympic women's 5,000m and 10,000m gold medallist Tirunesh Dibaba, ignored the call-up.
Jilo said the ban would be reconsidered as soon as the athletes reported for training.
He said: "We have to distinguish who is in good shape."
The suspension could in theory prevent Bekele competing at the London Olympics, where the 29-year-old is expected to be a serious threat to Farah in either the 5,000m, 10,000m or both.
Bekele's agent Jos Hermens said: "The situation is a little bit crazy.
"I haven't talked to him yet today, but I know most of the athletes or the coaches have heard about it.
"My experience says that [the EAF] will back off.
"I assume there will be talks and this will be turned around, but at the moment we have to live with this."
Hermens thinks the EAF is reacting to Ethiopia's poor performance at the World Championships in 2011 where they finished ninth in the medal table with just one gold.
Bekele, who was making his comeback in Daegu after an 18-month injury lay-off, dropped out of the 10,000m after 10 laps.
He declared himself fully recovered prior to the Bupa Great Edinburgh Cross Country this month, but finished well down the field.

THIS STORY AROUND THE WEB

About these result
Posted by Guihon at 8:26 AM No comments: