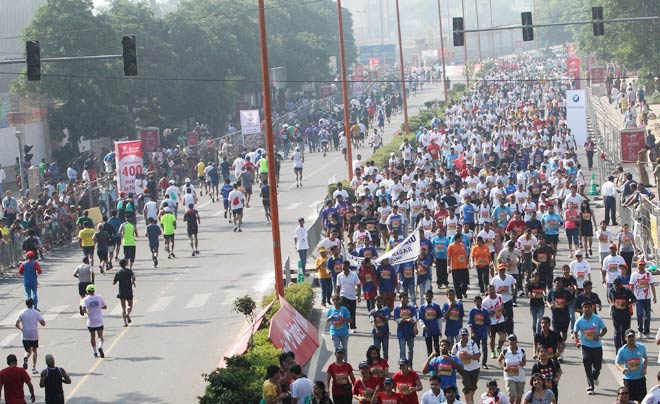 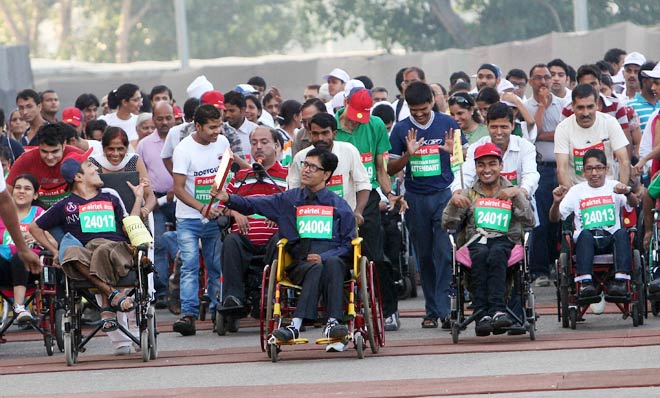 Share
Boston Marathon officials are closely monitoring the state of world marathoning in the wake of Athletics Kenya officially asking the World Anti-Doping Agency to investigate allegations of doping among its elite group of distance runners, according to a variety of reports.
“It’s something that’s always been on our radar. We want to make the sport as clean as possible,” Boston Marathon executive race director Tom Grilk said yesterday. “We advocate for out-of-competition drug testing for runners from countries like Kenya and Ethiopia. Why Kenya and Ethiopia? Because that’s where the champions are from, and if they were from Luxembourg we’d test (athletes) from there, too.”
Grilk said that if the allegations prove true against any athlete who cheats, then race organizers would react.
champion if it was improperly earned.”

If proven true, these doping allegations could wash over the sport like a tidal wave, as a vast number of East Africa countries like Kenya and Ethiopia have produced a plethora of champions at the World Marathon Majors circuit — Boston, Chicago, New York, London and Berlin.
Since 1988, when former UTEP runner Ibrahim Hussein became the first African male to win at Boston, Kenyan men have claimed 20 titles on the Hopkinton-to-Boston trek. Kenyan women own nine Boston crowns. The 40-year-old Falmouth Road Race, which has annually attracted an elite international field, has seen Kenyan men cop 18 titles and Kenyan women claim victory on 10 occasions.
The top three finishers at Boston are automatically tested for performance enhancing drugs, while at least two additional finishers among the top 15 are randomly tested. The tests are performed by the U.S. Anti-Doping Agency.
Dave McGillivray, who serves as race director of both Boston and Falmouth events, said the issue would spur race directors everywhere to do their homework when assembling an elite field.
“I think all of this has just come out, but innocent until proven guilty,” McGillvray said. “The BAA will have to do its due diligence. All races that have this type of high caliber fields will have to be more sensitive to the issue.”
Four Kenyan runners have been sanctioned so far this year for doping offenses, according to the International Amateur Athletic Federation, the governing body for track and field. Athletics Kenya, which oversees the sport in that country, has already suspended Matthew Kisorio, who tested positive for an anabolic steroid at the Olympic trials in Nairobi, Kenya in June. In April, the 22-year-old Kisorio led Boston at the 30K mark before finishing 10th in 2:18:15.
It not is clear if Kisorio, who did not finish in the automatically drug tested spots, was among those randomly tested by USADA.
“For us to get to the root cause of these claims and for transparency, we are inviting the police and World Anti-Doping Agency to assist us with investigations,” Athletics Kenya chairman Isaiah Kiplagat told the Associated Press this week
Posted by Guihon at 11:34 AM No comments:

Young Israeli and Palestinian sport lovers brought together by Laureus
September 20, 2012
There are lots of international ‘days’ held every year. Some very worthwhile, some less so (did you know there's an international Hat Day?).
But one very important day is International Day of Peace, championed by the Peace One Day organisation. And we at Laureus are very proud to be supporting this special day being held tomorrow, September 21.
Peace One Day was founded in 1999 and thanks in part to them, September 21 is now recognised by the United Nations as a day of global ceasefire and non-violence.
This peaceful message is at the core of so much of the work Laureus does across the world throughout the year.
One of the excellent sports projects we work with is PeacePlayers International (PPI), a project we support in countries as far ranging as Northern Ireland, South Africa, Cyprus and Israel/Palestine.
But as far away from each other as these places are, and as culturally different as you may think of them, they also have something in common: they all share a tragic history of conflict.
PeacePlayers work with Laureus in countries such as these to work toward a future no longer blighted by the scars of violence and war, but of peace and co-existence between different communities.
And this is helping to be achieved through the power of sport.
Take the project’s work in the Middle East, for example. Here, working with both Israeli and Palestinian communities, young basketball lovers from both backgrounds are brought together on the court.
This is often the first time youngsters from each community would come into contact with those from the other background. And before taking part at the project, they would often think of themselves in terms of being Israeli or Palestinian. It was a clear cut divide, and with such a history of conflict between these two peoples, some children even found themselves fearing the other youngsters they considered to be ‘different’.
What we have learnt from our work with PPI here is that by playing together, these youngsters begin to break down the barriers and fears that existed before and begin to think only as team-mates.
The game may only last a short while, but it is this experience of having preconceptions challenged that can last a lifetime.
For more info on this peace-building work through sport be sure to follow us on twitter and to find out more about Peace One Day head here.
Posted by Guihon at 3:12 AM No comments:

Elite runners battle across the line in the Great North... - YouTube

Elite runners battle across the line in the Great North... - YouTube: ""

Newcastle, UK - Tirunesh Dibaba made an immediate impact in her Half Marathon debut with a victory in Sunday’s Bupa Great North Run.

The 26-year-old Olympic 10,000m champion won the race in 1:07:35, the seventh fastest time this year. But more importantly it was one of the fastest Half Marathon debuts ever. For the Ethiopian this was a major step towards a road running career in the Marathon.

The Olympic Marathon bronze medallist Wilson Kipsang of Kenya took the men’s race in 59:06, the fifth fastest this year. Kipsang just edged out Kenyan Micah Kogo (59:07) while Imane Merga of Ethiopia was third with 59:56. About 40,000 runners started this IAAF Gold Label Road Race, which was run in fine weather conditions.

A fast race developed when five runners pulled away from the field early on: former world 10km record holder Kogo and fellow-Kenyan Emmanuel Bett worked at the front with Mike Kigen (Kenya), Merga and Kipsang following. Kipsang, the reigning London and Frankfurt Marathon champion, sat back at the back of the pack for most of the first half. Just five weeks after the Olympic Marathon he chose a more careful approach. "I felt fine after the first half today," he said.

The lead group passed the 10km mark in 28:02. At that time they were still on pace for the course record established by last year’s winner Martin Mathathi (Kenya/58:56). It was then after around 12 kilometres, when Kogo and Kipsang surged ahead and left the others well behind. Forcing the pace the two Kenyans opened a significant gap. However Kogo and Kipsang could not quite keep up the pace. Between 15 (41:51) and 20 (56:10) kilometres they lost a couple of seconds, putting the course record out of reach.

But instead a fascinating finish developed. First it was Kipsang surging ahead when the road dropped steeply towards the long finishing straight next to the North Sea. However there was still one mile to go.

"I knew the straight was very long, so I was not worried," said Kogo, who was fourth with 1:00:03 here a year ago. Kogo took the lead and with 100 metres to go carrying a two-metre lead, he looked to be the winner. But somehow Kipsang managed to find another gear when there was no more than 50 metres to run.

"I was trying to run faster and faster because I knew Wilson was still behind me," said Kogo.

"The gap was not too big so I said to myself, 'hang on and give everything, it is still possible to win,’" said Kipsang, who clocked the third fastest winning time in race history. "I recovered well after the London Olympic race because it was not such a fast Marathon. Maybe I will now run another Marathon this autumn."

Dibaba partly owes her very good time to Jelena Prokopcuka. It was the 35-year-old Latvian who surprisingly took the lead early on, setting the pace to well beyond the 15km mark. Behind Prokopcuka were Edna Kiplagat, Tiki Gelana and Dibaba passing the point in 48:33.

It was around the 17km mark when Prokopcuka could no longer hold on that Kiplagat started pushing the pace. While Gelana was almost running next to the Kenyan Dibaba stayed a metre or two behind them. It was still the same constellation, when the trio made the last turn onto the long finishing straight. Dibaba then moved ahead with 800 metres to go. But Gelana and Kiplagat held on. 200 metres further down the Olympic marathon champion dropped back a little. But it was not until the final 400 metres – the last lap on the track so familiar for Dibaba from her great victories – when the Ethiopian finally opened a gap on Kiplagat, who did extremely well considering that this race came only six weeks after the Olympic marathon.

"I had not specially prepared for this race," said Olympic winner Gelana. "So this was a good result for me because I ran a personal best. Her expectations of Dibaba as a marathoner? "Tirunesh will be a great marathon runner. She may even break the World record one day."

"I was running careful, because this was my first race at this distance. So I waited until in the last mile before I went ahead," Dibaba said. "I expected to win today. And this race really helps me regarding my next step to the marathon."

However she has not yet decided where and when she will run her debut. "I plan to run a Marathon next year. But I don’t know if it will be in spring or in autumn." But after a successful Half Marathon debut Dibaba knows what she will be aiming for when she will run her next race at this distance. "If I will run on a fast course I want to break the world record!" That mark is currently held by Kenyan Mary Keitany with 1:05:50.

Jörg Wenig for the IAAF 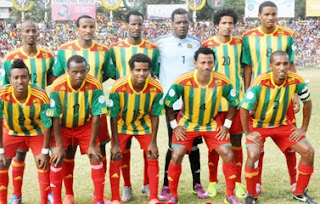 The draw was held at  CAF HQ in Cairo led by Secretary General, Hicham El Amrani and included the fixtures for the preliminaries, first and second round matches from which 15 teams will emerge to join hosts South Africa for the finals.  The qualifiers are played on regional basis with the composition of the finalists as follows : two from North Zone, two from West A Zone, three from West B Zone, three from Central Zone, three from Central East and three from South Zone (including hosts South Africa)
The seeding system used for the draw took into consideration amongst other criteria the teams’ performances from the last two editions of CHAN finals rankings.
CENTRAL – EAST ZONE
Preliminary Round
29. Burundi vs. Kenya
30. Kenya vs. Burundi
31. Eritrea vs. Ethiopia
32. Ethiopia vs. Eritrea
1st Leg Match: Week of November 30- December 2, 2012
2nd Leg Match : Week of December 14-16, 2012
For complete Fixtures
Posted by Guihon at 1:00 AM No comments: