Ethiopia's Magiso out of Games of 2012 Olympic London | Reuters 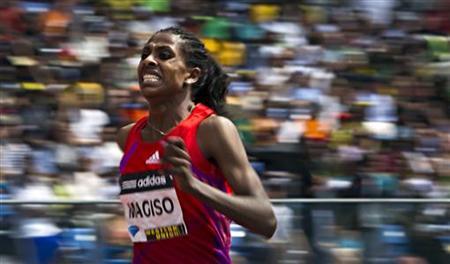 Magiso was the only female 800m runner in Ethiopia's team and was highly tipped to win the gold after beating Kenya's Olympic champion Pamela Jelimo in the Rome Diamond League meeting in June and having another impressive win at the New York Diamond League.

On a more positive note, Ethiopia's Tirunesh Dibaba has confirmed she will race in the 5,000 meters as she attempts to repeat her double from 2008.

Dibaba, who won the 10,000m in London on Friday, has been entered in place of Genet Yalew alongside Meseret Defar and Gelete Burika in a formidable team.